In looking back at his long and prestigious career, 2020 represents a real low point for Valentino Rossi, who, we’re sorry to say, is experiencing something of a downward trend. From 1996 until now, the phenomenal rider from Tavullia has never faced such defeat and the future looks far from bright.

And it’s not just a lack of results that pushes us to write this. Beyond his single podium, scored at the Angel Nieto circuit during the Andalusian Grand Prix, number 46 has also had to deal with the blow of four ‘zeros’, which came at season opener Jerez, at home at Misano and then at Barcelona and Le Mans. His retirement from the Valencia race was yet another setback, the rider currently lying fifteenth in the championship, undoubtedly his worst world championship performance to date.

And that’s not all unfortunately. He won’t be jumping for joy at the thought of going from factory to satellite status, so used to being front and centre in the eyes of all the manufacturers he has represented. From Aprilia to Honda, from Yamaha to Ducati, the nine-time champ has always been the undisputed number one rider, no doubt about it. But this is no longer the case, and 2021 will see him with Petronas. 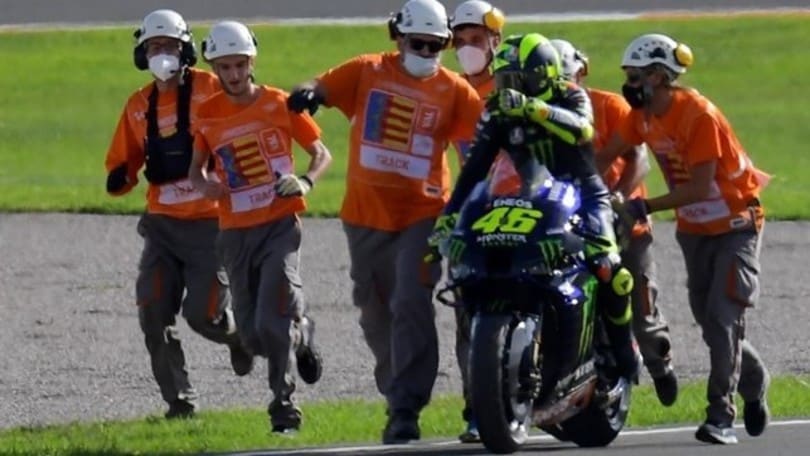 Last but not least, Covid-19, but fortunately Rossi has come through it

Coronavirus makes no distinction in terms of race, class, politics or profession, with motorcycling legend Rossi one of many sportspersons to have suffered. A real stroke of bad luck, because the rider, unlike a government employee, cannot exactly request sick leave. No, the rider must – and wants – to line up week in, week out, even when things get tough. But with Covid-19 this is impossible and so Valentino has been sensible, staying home in Tavullia the wise choice. Perhaps the only choice.

Because those who have contracted the virus either show no signs or demonstrate clear symptoms, at least in the most serious of cases. Aside from two days during which he felt unwell, luckily Rossi has simply needed to rest. The best news in all this.

Yamaha the worst? Only Rossi has failed to score a win

The M1 bikes are struggling, but Quartararo, Vinales and Morbidelli have won at least one race apiece. The M1 might demonstrate a lack of continuity, but it’s not the only one. Look at Ducati and Honda for example. Dovizioso is the very emblem of a lacklustre Ducati, while Nakagami finds himself playing leader from wingman, despite not being ready. KMT is always jostling, Suzuki takes centre stage. Yamaha is up and down.

Back on board after quarantining, Rossi was giving it 100%. Until his bike fell silent. Number 46 laughed it off, as he often does. The champion will take the positives from what has been a horrible year, not just for him, but for society as a whole.