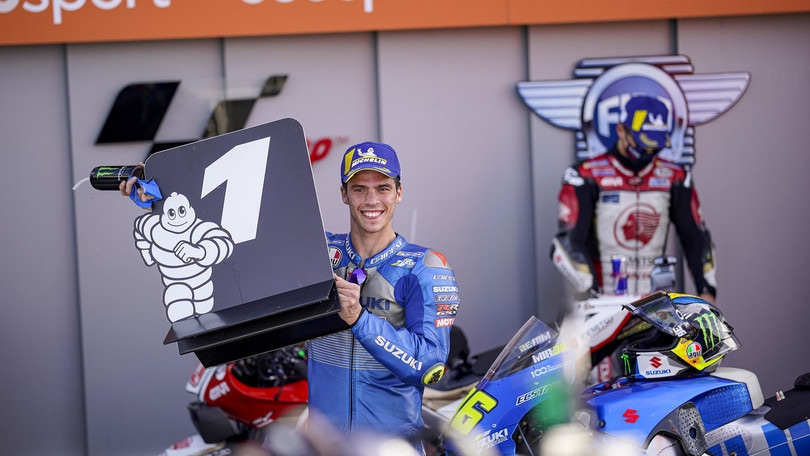 Having scored his first MotoGP career win last Sunday in the Grand Prix of Europe, a door to paradise opens up for Joan Mir, or rather the possibility of a first title, and also victory for Suzuki that could score its first constructors' title since 1982.

The Majorcan arrives at the Valencian GP with a 37-point advantage over Quartararo and Rins, and 41 points on Maverick Vinales. Almost out of the running at this point are Morbidelli and Dovizioso, 45 points back.

A first match point, then, for Joan Mir and Suzuki, who may well be crowned 2020 World Champions at the end of the second event at Valencia, bar any unexpected setbacks in the race.

Let’s look at the various combinations that would see the Spaniard and the Hamamatsu team back on top in the Riders’ and Constructors’ championships, 20 and 38 years respectively since the last time.

Combinations for the title

He reaches the podium. The results of his rivals (Rins, Quartararo) are irrelevant.

He arrives eighth, ninth or tenth and Viñales doesn’t win, while Quartararo and Rins do no better than third.

He arrives 11th and Viñales, Franco Morbidelli or Andrea Dovizioso don’t win and Quartararo and Rins do no better than third.

He arrives 12th, 13th or 14th and Morbidelli or Dovizioso don’t win, Viñales does no better than third, and Quartararo and Rins don’t reach the podium.

Suzuki is champion if…

Suzuki comes to Valencia with a 7-point lead over Ducati, thanks to the penalty inflicted on Yamaha for the engine valve debacle.

The Hamamatsu manufacturer can win the constructors’ title if its first rider across the line scores at least 18 points more than the first Ducati rider, one more than the best Yamaha and losing no more than three points to the first KTM.