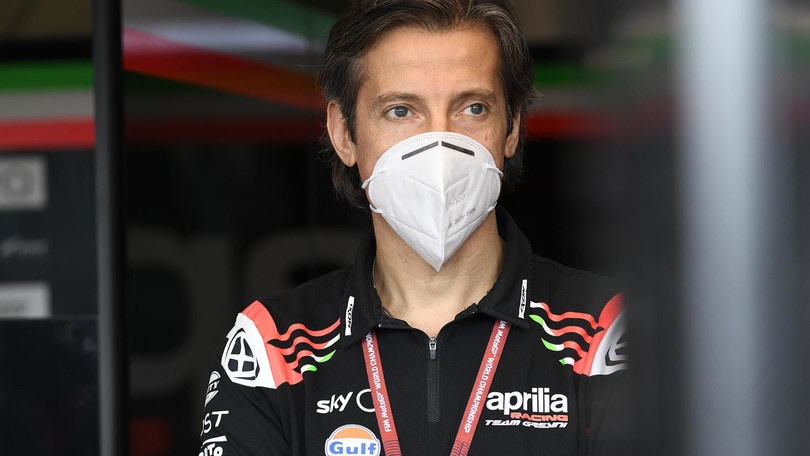 On Thursday at the penultimate GP event, the CEO of Aprilia Racing spoke more about Iannone and team plans for 2021: “We like an American rider who went well in the wet last Friday”

With just two races to go before the end of the championship, and also due to the Iannone situation, Aprilia has not yet defined its plans for next year. In an interview for MotoGP.com, the CEO of the Noale manufacturer, Massimo Rivola, talked more about Iannone but particularly about his personal ‘list’ of possible RS-GP riders for next season.

“Disappointed about the Iannone saga”

In the first part of the interview, Rivola outlines the situation with Andrea, two days after confirmation of his 4-year disqualification: “We’re disappointed – he explains – we knew there was a possibility he wouldn’t be with us next year because the FIM had already handed out an 18-month disqualification. To be honest, no one expected such a harsh penalty, they’ve ruined a rider’s life, not just his career. I’ve not seen any technical reason to justify just a severe sentence, perhaps there was something else. It’s a bad message for our sport”.

Discussing the statements released immediately following confirmation of the Italian’s ban, Rivola adds: “It’s our job to look ahead of course. We have to put feelings behind us and be more pragmatic now. Being in this position at the end of the season is not good at all.”

The most interesting part of the interview with the Aprilia boss related to next year’s riders. Rivola states: “We’ve got a few names on our list. As an Italian team, we of course dream of Andrea Dovizioso, but there are other options. I’ve always said that our bike is not easy and an experienced rider would be preferable. Next year will see many young riders arriving in MotoGP and I think it might be good to go in that direction. It looks as if Moto2 serves as good training for those young riders and there is a lot of talent in that class.”

Rivola makes subtle reference to Gerloff, saying: “Not just Moto2. Last Friday we saw an American rider who was very fast on his first outing with a MotoGP. To be honest, there are various options we’re considering. It’s late unfortunately, but it’s also early because we’re starting now.”

Talking further to Sky this morning, Massimo Rivola mentioned two riders that were previously on his list, or rather Andrea Dovizioso and Cal Crutchlow. Re Dovi, he had this to say: "We respect his decision, but it’s a shame. An Italian rider on a developing bike could have been a good pairing and we could have done well together.”

As for the Brit, Rivola adds: "Cal was a sort of "back up" for us. But just as we were coming to finalise the agreement, he opted for a quieter life. Being a test rider is different to being a full-time rider. He’s chosen a lifestyle that we can understand, as he’s of a certain age and has a family.”

The Aprilia CEO then set out a time frame for rider decisions: “Within 10 days we’ll have an idea of our plans. We’ll be at the Jerez tests straight after Portimao and we’ll have clear ideas about our riders by then.”

To conclude, the Aprilia CEO spoke positively about the testing programme carried out by Brit Bradley Smith, who was substituted by Lorenzo Savadori at Valencia: “Firstly, I want to say that the work done with Bradley has been good. He was hired by Aprilia as test rider and then became rider this year. He is also a possible for next year. I don’t want to name names for now. Of course, Dovizioso is first choice but I don’t think it’s possible. First we need to sort the rider issue and then decide on test riders.”

To this end, Rivola also mentions Savadori, who rode the RS-GP last weekend: “I’m interested to see what Lorenzo will do in these last races, I’m sure we can help him become a better MotoGP rider.”

MotoGP, Andrea Dovizioso and the 2022 scenarios