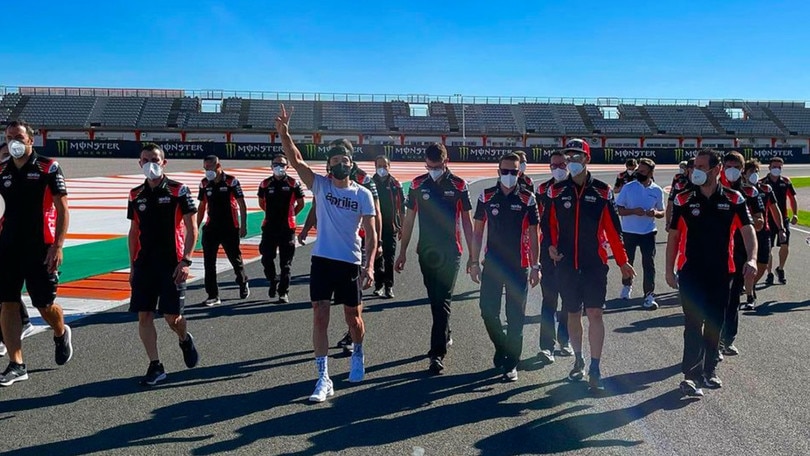 The team was out at Valencia circuit for the rider ‘track walk’ today and video called Iannone, who replies: "My head and heart are there with you. I’m sure we’ll still do many things together”

The CAS decision to extend Andrea Iannone’s ban to four years, from an original 18 months, continues to provoke reaction. Among the first, coming right after the sentencing, was that of Aleix Espargarò, who defended the Italian on his social media pages, calling the sanction excessive.

The entire team headed out to walk the Valencia track during the habitual rider 'track walk'. Riders and technicians, headed up by the CEO of Aprilia Racing, Massimo Rivola, and technical director Romano Albesiano, walked together, almost in formation, and during the walk they chose to video call Andrea Iannone, to show him their support.

The Italian rider thanked Aprilia for its gesture of solidarity on social media: "Thanks guys, I’m one of you. I wish you all the best and hope you are soon able to express your full potential. My head and heart are there with you. I’m sure we’ll still do many things together”.

The walk was intended to show the team’s unity. Also in attendance were Aleix Espargarò and Lorenzo Savadori, who is promoted from test rider to rider for the final three races in place of Bradley Smith.

Meanwhile, the search is on for an Iannone replacement for 2021 and, following Andrea Dovizioso’s negative response, the choice may come down to Marco Bezzecchi or Fabio Di Giannantonio, or even Tito Rabat or Aron Canet, who appears to have been championed by Max Biaggi after they came so close to the Moto3 title together two years ago.