Moto2, a four-way battle in Portugal: here are the combinations for title glory 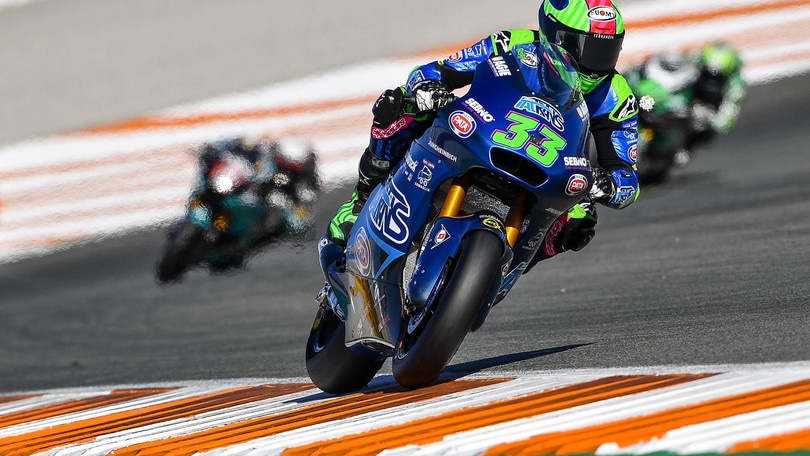 The intermediate class arrives in Portimao with four riders within 23 points of each other. Let’s see how D’Artagnan Bastianini and the other Three Muskateers can win the title

The last dance is about to play out in Moto2, the category leader holding more points (194 points Bastianini) than the frontrunner in both MotoGP (174 points Mir) and Moto3 (170 points Arenas).

Of the four fighting for the title - Bastianini, Lowes, Marini and Bezzecchi – only the Brit has seen Portimao before (2013, when he won the Supersport race) but he is the least physically fit after a crash at Valencia left him with a swollen hand and only a fourteenth-place finish.

Let’s look at the possible winning combinations for the Moto2 Fantastic 4.

Enea has more than one hand already on his first title, after having come so close to the Moto3 trophy in recent years. After an apprenticeship Moto2 season in 2019, Bestia set out with the aim of fighting for the title this season, and that’s exactly what he’s done, now with a good chance of moving up to MotoGP as Moto2 champion.

Bestia is champion if…

He finishes 9th, and Lowes and Marini don’t win

He finishes 14th or worse, Lowes doesn’t reach the podium, Marini does no better than 3rd and Bezzecchi doesn’t win

Lowes: world-class after some unlucky years

Alex’s twin brother started the season with physical problems and a few crashes too many but he rejoined the title fight during the Le Mans, Aragon 1 and Aragon 2 races, benefitting from problems suffered by the Italians (Marini and Bezzecchi especially). His mistake at Valencia 1 could have been his undoing but he’s not lost heart and following the FP3 crash at Valencia 2, he gritted his teeth to cross the line 14th.

Sam is champion if…

He wins and Bastianini does no better than 5th

He finishes 2nd, Bastianini does no better than 10th and Marini doesn’t win

He finishes 3rd, Bastianini does no better than 14th, and Marini and Bezzecchi don’t win

Marini: back on the straight and narrow

The third title contender is ‘Maro’. At a certain point of the season, he almost looked like a shoo-in for the title considering the difficulties faced by Bastianini and Bezzecchi but a bad accident in free practice at Le Mans has seen Luca on the defensive in the last four races. Winning a championship would mean so much to Luca, also in light of his move up to MotoGP next year.

Maro is champion if…

He wins and Bastianini does no better than 9th

He finishes 2nd, Bastianini does no better than 14th, Lowes and Bezzecchi don’t win

Last but not least is the other Sky Racing Team VR46 rider, Marco Bezzecchi. Despite some highs and lows this season, ‘Bez’ has scored two important wins (Stiria and Valencia 1). Marco will need to give it his all come Sunday at Portimao and see what the others do, also because both he and Lowes will stay in Moto2 while Marini and Bastianini will move to MotoGP next year.

Bez is champion if…

Moto3, Portuguese GP: here’s how Arenas, Ogura and Arbolino can score the title