There are races that remain in the heart of riders even years later. And for Valentino Rossi one such race is Welkom 2004, his first with Yamaha after moving from Honda and one of his absolute best.

The Doctor spoke to MotoGP.com about why that GP was such a masterpiece, a fitting response to those who thought him crazy for moving to Yamaha.

“They didn’t think I could win with Yamaha, in the first race”

Valentino Rossi remembers the 2004 Welkom race with particular affection, referring to it as a “masterpiece”. A race that saw him continue the winning streak of late 2003.

“For me my best race was my first win with Yamaha at Welkom - explains Valentino - a very special victory for me. When I moved to Yamaha from Honda, everyone called me stupid, crazy. Many people thought I could win with Yamaha but not in the first race. For now, that race is my masterpiece”.

And, in effect, Valentino is right in calling that race a masterpiece. One he constructed already from Saturday, setting pole with the Yamaha, ahead of Gibernau and Biaggi on the Hondas. The Spaniard stuck with his two biggest rivals during the opening stages, before leaving the Italians to battle it out later in the race.

The highlight of the South African GP was this Rossi-Biaggi fight for the win. An incredible battle, similar to the Bayliss-Edwards shootout at Imola in 2002. Biaggi’s speed versus Rossi’s obstinacy, Valentino riding a less than perfect M1 that was nevertheless able to keep pace with the Italian’s client Honda, both riders demonstrating insane race pace and separated by just milliseconds.

The decisive move and the handshake

Biaggi moved into the lead four laps from the end, but two laps later, through the final section of the track, Rossi took over and held the lead all the way to the line. Despite Max’s best efforts throughout the closing stages, the win went to Valentino, who thereby scored his first Yamaha victory, while the Honda rider took the fastest lap. Right after they crossed the line, the two rivals shook hands in a scene that was to go down in history, like Senna congratulating Prost on the top step of the podium at Adelaide in '93.

An historic and symbolic celebration 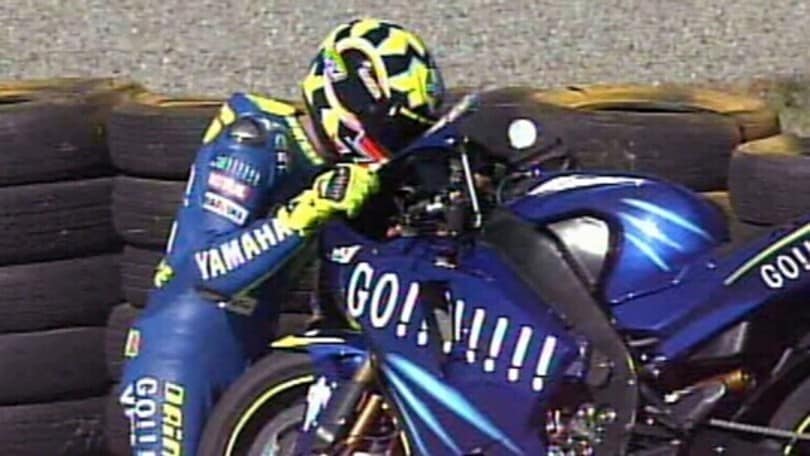 Valentino leaned his M1 against a stack of tyres and then sat down next to it, taking in what he’d just done, or rather winning with the Yamaha against his great rivals Honda and Biaggi. He then knelt down and kissed the front fairing of his bike, a bike that would see him go on to win his sixth world title, his fourth in the top class.

Sam Lowes: “I want MotoGP, but not with Aprilia”

MotoGP, Tardozzi: “There's a lot to reflect on for the future”

MotoGP: who will replace Marc Marquez? Dovizioso the right man

MotoGP, no Brno in 2021: excessive costs