Moto2, Sandi: “Bastianini has become a champion and a man” 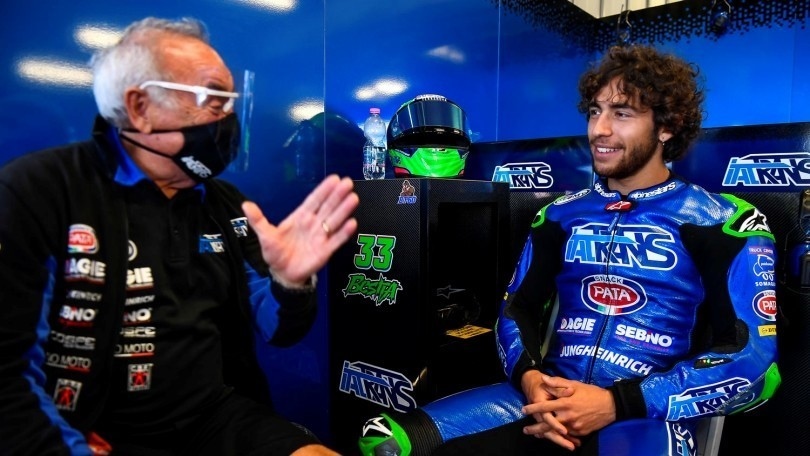 After wins with Harada, Biaggi and Lorenzo, Giovanni talks about the rider with whom he’s scored his 7th world title: "He is very talented and has grown technically, physically and mentally”

Six titles in the historic 250, with the likes of Tetsuya Harada, Max Biaggi (with whom he also won in Superbike) and Jorge Lorenzo, but Giovanni Sandi hadn’t yet scored a Moto2 title. So his win with Enea Bastianini is particularly satisfying, a masterpiece created ‘from scratch’. Two years ago, it was Sandi who pushed to have Enea on Team Italtrans, convinced he could achieve great things. All he needed was a little guidance, something that the team’s technical director was well able to provide, Bastianini even referring to him as a "second father".

Sandi discusses Bastianini’s rise to the top and the title, secured at the final Portuguese GP. "I had the right level of tension and experience to cope but there were still a couple of almost sleepless nights”, admits Sandi. “You need to have everything under control, the team and rider, and there are many fears that something might happen".

Saturday’s solid qualifying at Portimao was essential for a good result.

"Yes, because Enea was at risk of having to start well back, but I prepared the right tyres for the final two laps and this meant he was calm. With only two laps available, you have to do better than good. Qualifying was very important, as it’s hard to pass at a track like Portimao".

What does this title mean?

"It’s very significant because I came to this category with this very goal. You can’t take a title win for granted here, as Moto2 is very tough and the riders are often very close. And then there are those high-end teams that are always the ones battling it out. I wanted the title at all costs and I did it".

What was your contribution?

"I put together the right group of people to be able to do it. I found the people, the Italtrans company gave me everything I needed, and that’s no small thing. Then I wanted Enea, I was fixated on him and believed in him".

So Enea is your “creation”?

"Yes, in 2018 I met his manager Carlo Pernat at Jerez, with our owner Laura (Bertulessi), to make the deal. Enea had had a disastrous Moto3 season and was working with Leopard, I was keeping an eye on him because I liked him. I knew he could do well and wanted him with us. And it is with him that we’ve had this amazing experience".

What have you passed on to him over the two years?

"He’s become more of a man, he’s better prepared and more sure of himself. I focused on his preparation and he has grown both technically, physically and mentally. He’s stayed active. Already at the Qatar season-opener, when he was on the podium, I knew he could do big things this year. He’d turned the corner and I was sure he’d fight for the title. Then there was a break due to the pandemic, which was all a bit of an unknown. And then he came back at Jerez, immediately fast and determined".

Enea has said that you’ve sometimes felt like a second father to him.

"(he laughs) Yes, I bet. I sometimes took the liberty of yelling at him, telling him what to do. Maybe I was a bit much, but it was necessary, and he’s become more responsible as a result. At that age, guys are still a bit like kids, but no one gifts you anything in this world and you need to be determined. It worked out, and in the end he told me how much I mean to him".

What was the season highlight?

"It was amazing when Enea won at Misano, at home in Italy".

And the toughest moment?

"At Le Mans. In the previous race, at Barcelona, Enea had had a little wobble and wasn’t able to race as he wanted. In France, in the difficult conditions, he’d immediately complained about a technical problem but then at the end of the race he flipped out and I had to step in, playing the part of bad dad. When there’s another race straight afterwards, you need to sort things out in order to be calm and ready for the next one. There was a little tension but that’s important too. And then you need to have the strength to react. I realised that we’d start over as usual, everything the same between us".

What was the first thing you said to world champion Enea?