For Enea Bastianini this Christmas might be his sweetest so far, considering his move to MotoGP and particularly his first world title win, which he celebrated on Sunday at home in Rimini. A Christmas he will spend with his girlfriend Alice, and parents Antonella and Emilio, who work as market sellers.

Having a child who’s a world champion is probably hard to explain if you haven’t experienced it, but ever since that magical Sunday in Portimao, mum Antonella has been able to celebrate her champion. “The forty minutes of the race were terrible - she explains - not because of what Enea was doing, but for the risk that he might get caught up in a crash. It’s something you always fear, but even more so at times like that. That aside, I was confident, and in the end the prediction came true”.

“Before the season began, Emilio had surgery and in hospital we got talking to a couple, and the woman was into card reading. She wanted to know a little about Enea and then she clearly told us that he should be daring this season as it was his year. She told him the same thing when he came to the hospital. This prediction stayed with me all season and was the only thing I said to Enea on Sunday before the race”.

How was this intense season for you at home?

“The fact that Enea was fighting for such an important goal didn’t impact on our sense of calm, and he too remained calm, thanks also to the fact he lives with Alice (his girlfriend). We probably worried more about Covid, seeing as logistical problems and possible infection were always just around the corner”.

Speaking of Alice. Many people close to Enea have said how her presence has helped him in many ways. What do you think as a mum?

“Enea is a laid back guy, contrary to what he was like as a kid, and Alice’s presence has helped to fuel his state of grace. I can say, hand on heart, that her presence during the final race weekend was fundamental”.

"He was up to all sorts as a kid, now he’s calmed down" 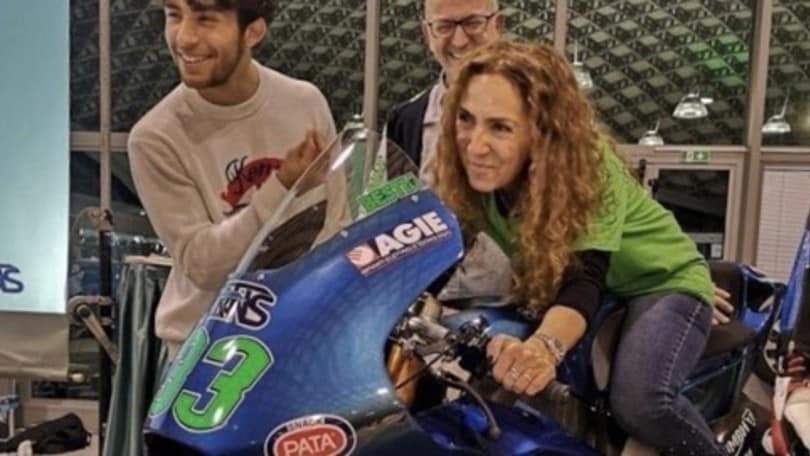 Let’s take a look back. What did you think when Enea decided he wanted to be a rider?

“He first got on minibike by chance, and the change we saw in him from that day was really striking. He didn’t seem like a kid but more grown up, so it didn’t take much to understand that riding a bike was something that made him happy”.

What do you feel when you see Enea on track?

“He inspires confidence. When he was small he really was a pest, and I’d often say ‘I wouldn’t hold your hand going down the stairs, but I’d get on a bike with you’ (she laughs). As a kid he got up to all sorts. We were in Holland once for a race and he fell into a scarp, another time they hit him in the eye with an ear of corn and nearly blinded him. Let’s say he was always getting caught up in something, so I’m actually calmer when he’s on track”.

As a child, Enea was also a talented diver, but he put that aside in favour of motorcycling. Was it hard for him to choose?

“We carried on with both sports for as long as possible, often doing diving competitions on Saturday and bike races on Sunday. He didn’t want to let either of them go, also due to his competitive spirit, but when this was no longer possible, he struggled. It was hard because he loved swimming and was already close to the national youth side but he made his decision on his own. The only thing Enea didn’t like about diving was being judged by the judges, he never agreed with them”.

Describe the new Moto2 world champion in your own words, as a mum.

“He’s an exacting guy, both with himself and with other, but he’s also very sweet and good to everyone. After the Austrian race he was devastated that he’d caused another rider to crash, even if it wasn’t really his fault. How was he at home? It’s hard to say in one world: let’s say he was hard to manage, in a good sense (she laughs)”.

Moto2, Sandi: “Bastianini has become a champion and a man”

MotoGP, Razali: “Morbidelli can fight for the title in 2021”