Franco Morbidelli has concluded his emotional year as world championship runner-up by competing on four wheels, in the Monza Rally. Emotion is a concept that the Italo-Brazilian rider, the first of Rossi’s Academy pupils, expresses in his own way. The 26-year old doesn’t fit the MotoGP rider cliché. When not on the bike, his world moves at a slower pace, and is not petrol but diesel-fuelled. A result of his calmness and a composure that has a lot to do with his Brazilian roots, something he flaunts with pride on his helmet.

As Franco himself has said many times, Quartararo's explosion during 2019 – a year in which Morbidelli was meant to be the Team Petronas reference – came as a real blow, mentally speaking. To prevent the situation from repeating itself, the former Moto2 world champion worked hard last winter so as to be ready and no longer viewed as the ‘second’ rider. This motivation saw him play a starring role in 2020, his anti-Quartararo therapy clearly having worked. And now, Frankie finds himself alongside none other than Rossi.

You’ve been in the championship since 2014, and after three years you enjoyed your first wins and secured the Moto2 title. You debuted in MotoGP in 2018 and 2021 will be your fourth year… Complete the phrase…

"I can’t make predictions. I don’t have a crystal ball and don’t know what my results will be”.

An elite sportsperson always has clear goals, and yours is the title, right?

"I don’t know if all top-level athletes have clear goals. I’ve never had them for example, I’ve always gone on my feelings, following my heart. I’ve always tried to move with the natural speed of things, without putting pressure on myself. I’ve always enjoyed myself in everything I do, and I want to continue to do so, achieving all I can in every race”.

From the outside, you are perhaps the rider for whom it is hardest to attribute strengths, in terms of your riding. Can you help us?

"I don’t know, it’s unclear even to me! With my riding style, there’s no one characteristic that stands out over the others. I think it depends a lot on the race, I adapt my style to what is required in that moment, to the feeling and set-up that we put together with Ramon Forcada".

The relationship you have with your future team-mate Valentino Rossi is special, and you’ve always said that you owe him everything, career wise. Are you ready to take a risk and duel with him on the last lap?

"It depends how great the risk is. But it’s not a ‘personal’ issue, rather it’s related to the risk. I’m ready to duel with Valentino, 100%, just like with any other rider”.

It’s a legitimate doubt, sometimes other Italian riders have been more ‘prudent’ when they find themselves there with Valentino.

When he battled with Pecco Bagnaia in Moto2, two years ago, Lorenzo Baldassarri confessed that he could no longer pretend that the rivalry with his VR46 Riders Academy team-mate didn’t exist. Do you think a similar situation might arise with Pecco, who you beat at Misano on the day of your first MotoGP win?

"At that time, Pecco and Balda were also housemates. Ok, it’s true that he and I have trained together for a long time, but then we have our own lives, we each have our own home, family, girlfriend”.

"I’m very Italian on the bike, focused on every detail, but then I’m Brazilian over the final two or three laps, particularly when battling for a result. In those situations, you need to be a little Brazilian, that liveliness and that dose of ‘madness’ that you need in a head-to-head battle". 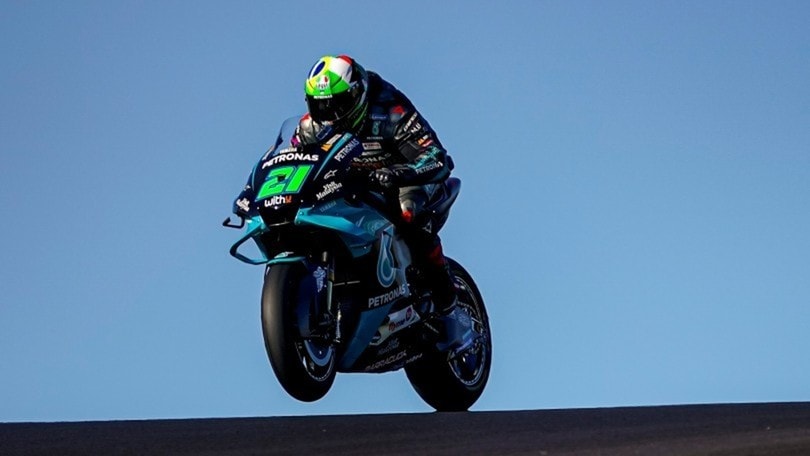 And when you’re not riding?

(he thinks for a second) "In life I’m Italian when I train, and Brazilian after midnight. After midnight I’m 100% Brazilian".

Who do you see when you look in the mirror?

"A person who is focused on improving. I like what I see, in general”.

In what way would you like to be different?

"I’d like to be two or three years younger maybe, that would be perfect. But you can’t always have perfect”.

What could you do if you were three years younger?

"Nothing particular in life, but in sport it would mean two or three more years in terms of my career".

What’s something that you cannot abide?

"A lack of respect, no doubt. That’s what makes me most angry”.

There’s a saying according to which a person’s profession shapes their character, so a rider is…?

Andrea Dovizioso said that his passion for MX was a way to disconnect from MotoGP, and that at this level a rider needs something so that they’re not always focused on work. What’s your “escape”?

"Talking MotoGP with my friends. In general, talking about bikes with my friends helps me to relax. I can speak freely, something you can’t do with people in the paddock".

This has definitely helped Morbidelli who, with three wins in the last nine races, finished the year as the strongest rider. Perhaps, with a couple more races, he might even have been able to fight Joan Mir for the title right to the end. But there’s always 2021.

MotoGP: new yacht for Rossi, the Doctor sets sail in 2021