The online presentation of the 2021 Ducati Lenovo Team concluded earlier this afternoon. In order to heighten the sense of belonging to the team and underline the Italianness of the bikes, the new livery of the Desmosedici GP is particularly red. The riders, 26-year old Australian Jack Miller and 24-year old Italian Francesco “Pecco” Bagnaia, are ready to begin their first season as factory Ducati riders in the MotoGP world championship.

Domenicali: "We start with a title"

“Racing involves passion and support and at Ducati we feel the passion and support of those following us from home”, began Ducati CEO Claudio Domenicali as the presentation got underway. “We start this season with a significant result, the winning of the 2020 title, during what was a complicated season with many variables, which saw everyone at Ducati Corse working as hard as they could. The 2021 season brings new elements, not least a new title partner, Lenovo, that was already with us and that has decided to take on a more important role”, announced Domenicali.

A technological leader in the field of computers, smart devices, data centres, services, and software solutions, Lenovo has been a Ducati sponsor and partner since 2018. Thanks to the new agreement, the firm will now offer the Ducati factory squad, now known as the Ducati Lenovo Team, an increasing level of support.

“Lenovo and Ducati, two brands that share key values such as speed, performance and innovation, have chosen to elevate their partnership to its highest level. We look forward to supporting the Ducati racing team and helping them increase their level of competitiveness in MotoGP”, said Luca Rossi, Senior Vice President at Lenovo.

“The new livery involves a lot of red, we wanted to really push the official Ducati colour", said Domenicali. The more intense red gives the Desmosedici an even sportier look. The bike also features a more aerodynamic and aesthetically pleasing tail piece.

The riders race numbers were also revealed, or rather #63 for Francesco “Pecco” Bagnaia and #43 for Jack Miller. 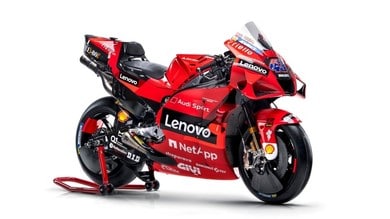 The virtual presentation continued with some backstage scenes between Domenicali, Luigi Dall’Igna, Davide Tardozzi and the two factory riders.

“There’s no getting away from the responsibility of being on a factory team but at the same time you have the support of people that want the best for you”, Domenicali tells Bagnaia.

“It was a fantastic end to the season”, continues Domenicali as he turns to Miller. “Valencia and Portimao… The final part of the season was amazing. You need to carry on like that”, he comments.

“I think it’s important to maintain the familiar style of the Pramac team, as that encourages results, and try to keep that positive atmosphere. And you can speak openly with the whole team. That will keep the momentum going”, Domenicali says to Miller.

Despite the ongoing emergency owing to the Covid-19 pandemic, the 2021 season should involve nineteen championship rounds. Before that, a first test day is set to take place on 5 March in Qatar, the session reserved to test riders and rookie riders, including Michele Pirro and the Ducati Test Team.

On 6-7 March, Jack Miller and Pecco Bagnaia will be out on track with their new team for the first time, for the first official two-day test of the 2021 season at the Losail International Circuit. This will be followed by a further three-day session, from 10 to 12 March, at the same Qatari track. The Doha circuit will also host the first two rounds of the season, which will take place at night over the weekends of 26-28 March and 2-4 April.

MotoGP, Quartararo and Miller on track at Rocco's Ranch

MotoGP, Fabio Quartararo: “I know Yamaha will listen to me”

MotoGP, Morbidelli: “I'd like the same bike as the other Yamaha riders”

MotoGP, Quartararo and Miller on track at Rocco's Ranch

Hayden the legend: Nicky inducted into the Motorsports Hall of Fame

MotoGP, Melandri: “This was my ankle at Laguna Seca in 2007”