MotoGP, Pernat: “Bastianini is a bull who can give the Ducati wings” 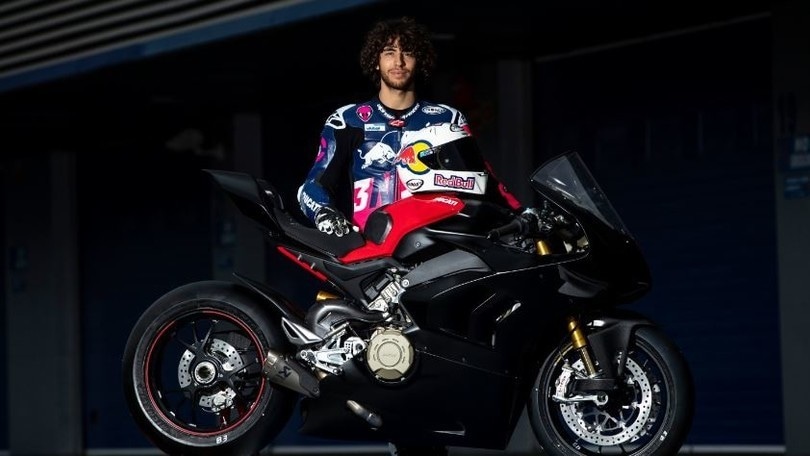 The Italian manager launches his pupil in the reigning class. The Moto2 champion is now with Esponsorama: "Enea is well suited to a MotoGP bike and Ducati is a dream come true for him"

The Jerez skies are greyer than ever, but red passion consumes Enea Bastianini, one of the new faces of the 2021 MotoGP championship. The Italian enters the top class with a Moto2 title, three wins and four podiums to his name.

In order to be physically ready for his many commitments, the new Esponsorama rider has been riding at Jerez, one of the ‘magnificent Ducati 7’ to take to the track with standard Panigale V4S bikes. He completed some laps of the Angel Nieto circuit under the watchful eye of Carlo Pernat: "Enea is an extraordinary talent – said the Italian manager – and I think he’s at the top of his game. The boy is in shape, smiling, confident in his abilities. His Moto2 title has only heightened that awareness of his abilities”.

Before taking to the track, the traditional photos. Beautiful helmet, pristine leathers. The brands are easily recognisable: “We’ve gone back to Red Bull and I’m pleased, for him and for me. It’s a big deal, a big project. I’ve noticed how strong he is, physically and mentally. Yes, he’s a bull who can give the Ducati wings, he cannot wait to ride the bike”.

A dream come true? Not fully, but he’s on the right path

Carlo knows the young Italian well, both managing and supporting the 23-year old: "Yes, he’s important to me and I know how Ducati has always been his ultimate dream as a rider. And now we’re here, although the dream has only partly come true. First Enea has to do well during his debut season with Esponsorama. Then he can start to think bigger".

It will be an intense championship.

"Yes, and that’s why the double-header in Qatar could work to his advantage, because racing at the same track could help. His goal is to continue to grow. As I’ve said, he has great natural talent, which has been further developed with Sandi in Moto2. The championship he won was incredible and well-deserved. His current and future prospects are excellent. I’m not looking too far ahead but… it would be great to see him on the Ducati factory team. We’ll work calmly and methodically to get there”.

MotoGP, Razali: “Valentino is a mentor, I’m curious to work with him”