During the team Repsol Honda presentation, Marc Marquez spoke about his physical condition for the first time in months. The Spaniard rejected some of the rumours that have been circulating and also talked about his return. And although we were all waiting for a potential date, or at least an estimate, it never came. Basically, Marquez does not know when he will return, if he will return, or how.

The martian has changed

“In recent months I’ve learned that there are many races but that I only have one body”, and then, “I won’t be at the Qatar tests, I don’t feel comfortable doing that”. This is what Marc Marquez had to say during the recent press meet. The Marc of old seemed to be hiding behind a mask and although his wide smile would emerge every so often, it wasn’t like the one we’re used to seeing after a race win.

Marc seems to have changed, grown up. More aware, he is not the same rider who, at the Jerez medical centre three days post-surgery, stunned the doctors my doing press ups so that he could get the OK to race again. Perhaps the martian we knew is no longer: “I was wrong to want to return that day at Jerez”, he says. Today’s Marquez knows that the decision he took that day was his biggest mistake and, in the seven months that he has had to stay home and watch his colleagues racing, this too has changed him. 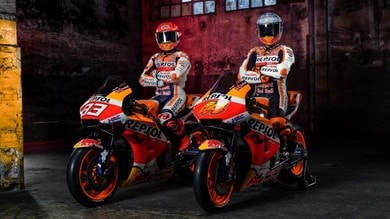 He can’t be the same when he returns

He is still keen to return, sure, but aside from debating whether this might be in 2021 or even 2022, we need to ask ourselves how Marc Marquez’s return will play out. Will he still be the daredevil of old? The guy who would practically pick the bike back up with his elbow? The guy who would look to crash simply to understand the limit? The guy who would go all out to set the best time if he didn’t like what the stopwatch was telling him during qualifying?

Probably not. Nobody wants this, but an absence of more than a year, combined with what the Spaniard has been through during this period, will surely mean that he comes back with a different kind of awareness. Also because, even if he wants to be the Marc of old, will he be able to take the same risks with an arm (and shoulder) that’s been through so much?

There are many unknowns, and while the hope is that he comes back at 100%, the reality is surely going to look a little different. When (and not if) he comes back, he’ll need to readapt to the bike and this might see him develop a new riding style, even new strategies. He’s always been a versatile rider who can adapt to change, and adapt fast, and so we hope that this is no different. Hope springs eternal as they say.

MotoGP, Marquez: “I'll return to the track when I can crash again”

MotoGP: who was Fausto Gresini

MotoGP, Marquez: “I'll return to the track when I can crash again”