2021 will be an important year for Franco Morbidelli as, after several seasons as a MotoGP apprentice, the 2020 runner-up is no longer an outsider but one of the sure-fire stars of the show.

The team Petronas rider is aware of this change: “It will be important to consolidate my position at the top again this year and I’ve worked hard this winter to further improve my performance. After a tricky start and some good and bad seasons, I’ve now shown that I’m ready to fight for the win, so I need to continue along this path”.

In terms of his technical package, Franco will have the same bike as last year: “Racing with the same M1 as last year, a bike I got on so well with, might be an advantage for me because I’m starting with a good base. I’m not complaining that I don’t have the latest bike, but this MotoGP trend that pushes everyone into signing new contracts so early might become problematic in certain circumstances”. 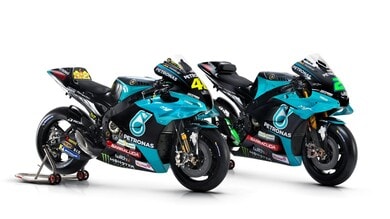 “Rossi? A friend, but also my number one rival”

His new team-mate is Valentino Rossi, with whom Morbidelli has a great relationship within the Academy, but this year he will need to consider him a rival: “Vale and I know each other very well, we’re friends away from the track and train together. He’s also a rival of course, but it’s impossible to separate Valentino the rider from Valentino friend and mentor, so it will be important to measure up to him, remembering that human relationships always come first though”.

As for Marquez, the 2017 Moto2 champion isn’t giving much away: “I have no idea what Marquez has been through from a physical and mental standpoint during this year away, but I struggle to remember any great champion, in any sport, having to take such a break at the peak of their career. He’ll still be strong when he returns, but he’ll struggle to forget such an experience”.

“The Qatar double-header will be key”

Lastly, Morbido touches on the upcoming Losail tests: “It’s going to be a strange start to the championship, because we have two tests in Qatar followed by two races at the same track. With so much data available, the margin for error is small, because we’ll all be so close. We’ll probably get a better idea of where everyone is once we get to Jerez, but the first races are key, especially in such an uncertain season”.

Whatever happened to: John Kocinski

MotoGP, Pol Espargaro: “It'll be memorable in Qatar with Honda”

MotoGP, Razali: “We'll give Rossi something new. Morbidelli? An artist”