Assen 2000: from the fracture to fainting, Capirossi’s heroic podium 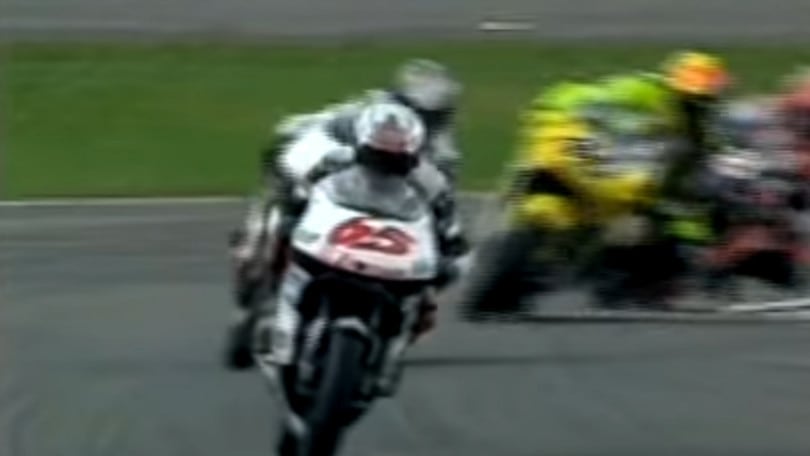 While we await news of Marc Marquez’s return, we tell the tale of another injury, that of Loris Capirossi at Assen in 2000

There are moments when riders become superheroes, executing feats of epic proportions that remain in our collective memory.

And that is exactly what Loris Capirossi did back at the 2000 Dutch GP, a race that went down in history thanks to the Italian’s stoic actions.

Friday's pole and the crash in warm-up

As per tradition, qualifying at Assen took place on a Friday. Loris secured pole position with a time of 2:02.058, exploiting the full potential of Sito Pons team’s Honda NSR 500.

Capirossi was in explosive form. He was aware of his strength come Saturday’s warm-up but it was here that his weekend was compromised. The three-time world champion attempted a risky pass on Belgian rider Degrelle, a dangerous move that resulted in a crash and a fracture to Loris’ left hand, already hurt in an incident a few weeks prior.

Loris wouldn’t hear of missing the race and wanted to compete despite the Dutch doctors reservations.

Capirex dealt with it when the doctor pressed down hard on the fractured hand. His third and fourth metacarpal might have been compromised, but his determination was not.

"I want to race" said the Italian and so he did, receiving the OK just one hour before the start of the race. Doctor Costa, the guardian angel who has taught the riders that nothing is impossible, supplied a cocktail of painkillers that would help Loris, as he put on his leathers, his wife Ingrid helping him with his glove. It was time to put on his helmet and harness that madness, bravery and lucidity.

The race seemed endless, the rain so typical of Assen causing the race to be suspended and split into two halves. Capirossi held on and finished the race third behind Barros and Criville, bursting into tears when he reached parc fermé before fainting in his wife's arms.

He had done it. And before leaving Holland, Capirossi already had his hand in plaster so as to be ready to race a few days later at Donington.

An heroic act that shows how we can control and overcome pain. A rider thing. A Loris Capirossi thing.