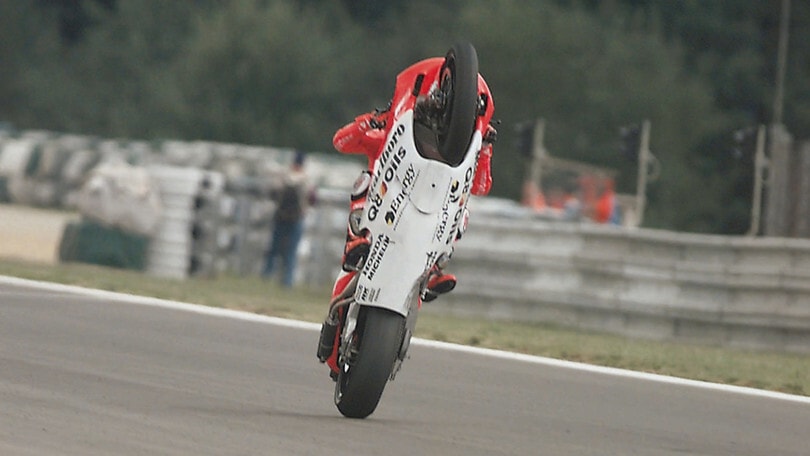 The euphoria of a key win and the desire to amaze and prove he could beat Mick Doohan: the meaning behind Biaggi’s wheelie at Brno

There is one episode in Max Biaggi’s career that remains impressed on our minds almost as much as his four title wins in the 250 class. We’re talking about his famous wheelie across the line at Brno, just after he won the 1998 Czech GP.

His rivalry with Doohan

This was Italian rider Massimiliano Biaggi’s debut season in the 500 class, following his four consecutive titles in the 250 class between 1994 and 1997. His success brought him to the reigning class in 1998, where Mick Doohan was the undisputed star of the show, the phenomenon of his time.

Max won the first GP of the year at Suzuka, a race that Mick failed to finish. The King of the 500 class then got back on track, winning four races, while the young Italian scored a series of podiums that kept him afloat in the general standings. Arriving at Brno for round ten, the Italian needed a win if he wanted to keep his title hopes alive.

Doohan got away from pole but crashed out early on, allowing Biaggi to move to the front. A lead that the Italian held to the line, for a win that saw him move back into first place in the standings. He celebrated with a pretty extreme wheelie, one which had some unexpected consequences.

A soft landing? Not quite

Hanging on to the handlebar, his bike almost vertical, Max was on the point of tipping over. As he landed, something that was captured only partly on camera, Biaggi hit the tank and his NSR 500 started to vibrate, his wheel wonky, the front fairing damaged.

A spectacular move, which was the result of unbridled emotion, the desire to celebrate a key win mixed with the desire to impress Anna Falchi - "She was kind enough to accept my invite to be here, and then she brought me luck”, explained Biaggi after the race.

“Everyone remembers that celebration", Biaggi commented years later. "It wasn’t exactly a calculated move. The bike remained in fourth gear, hit by a gust of wind, but luckily I was quick to get my foot on the brake".

A wheelie that remains the symbol of a season that was ultimately unlucky for Max, the rider receiving a black flag at Barcelona, but one that allowed him to star in one of the enduring images of modern motorcycling.

Mick Doohan: the rise from hell to heaven