While the world follows Marc Marquez’s recovery following last year’s Jerez accident, a fractured humerus, and three operations to repair the damaged bone, we are reminded of a Japanese rider who returned to racing with a damaged radial nerve, thanks to a special glove made by Spidi and invented by Doctor Costa that would allow the rider to activate the throttle and brake.

Japanese rider Noboru Ueda, who spent years in 125 and was two-time championship runner-up with 13 wins and 39 podiums over 160 races, crashed in France in 1998, fracturing his humerus and damaging the radial nerve which left his right hand paralysed.

Dr. Costa: “Marquez wouldn't have missed the season with me”

The accident and his return to the track

Paul Ricard, the French GP, 31 May 1998, so the fifth round of the season. In qualifying, Noboru Ueda took pole position ahead of fellow countrymen Sakata, the eventual race winner, and Manako, who retired on lap 17.

For Nobby, who was Lucio Cecchinello’s team-mate at the time, the race lasted just five laps. On lap six he suffered a serious accident in which he fractured his humerus and damaged his radial nerve. The result? A practically paralysed right hand.

The Japanese rider missed six races before returning at Barcelona, 100 days after the accident. Despite his paralysed hand, he was able to qualify fourteenth and complete the race, crossing the line in an incredible sixth place.

The consequences of the accident

The Japanese rider’s main problem, considering an almost total lack of mobility in his right hand, was that he struggled to open his hand and extend his fingers, while he was able to close his fist enough to twist the throttle and activate the brake lever. 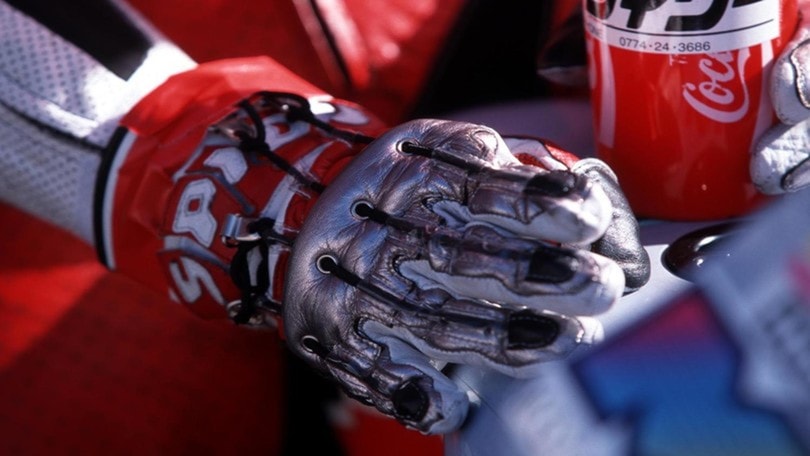 So how did Ueda ride? How did he manage the throttle and front brake with his right hand? He did it with a special magic glove, invented by Doctor Costa and created by Spidi, the company that also produced the rider’s leathers. To give him this ability to activate the gas and brake levers, Costa recreated an elastic ‘tie rod’ structure on the back of Ueda’s glove that looked a lot like the tendons in the hand and essentially did that same job. In the ‘normal’ position, the rods ensured that the fingers were stretched and the hand open; that way, Ueda only had to focus on closing his hand to open the throttle and/or brake, which he was able to do, leaving the rods with the task of reopening his hand once off the lever.

MotoGP, Valentino Rossi back at “his” Mugello

MotoGP, Marc Marquez on track again, this time at Portimão

MotoGP, Dr. Costa: “Marquez wouldn't have missed the season with me”

Mick Doohan: the rise from hell to heaven