Frankie Chili’s (futile) celebrations and his tears after the race 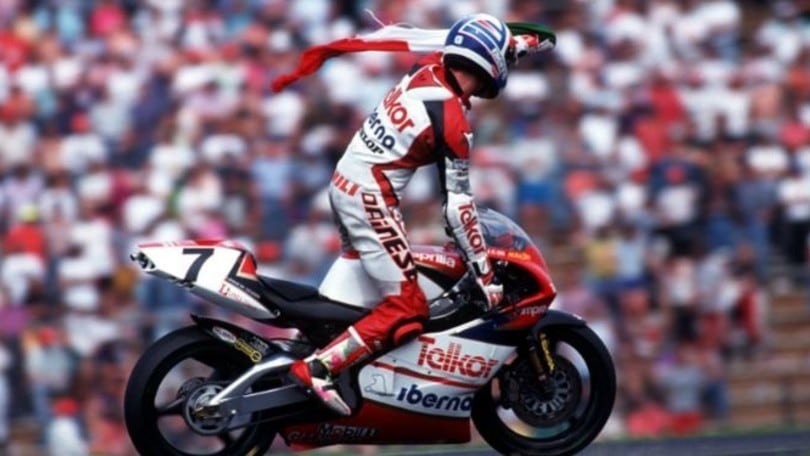 In the 1992 250 GP, the number 7 rider was convinced he’d finished in second place, but he actually still had a lap to go. Having realised his mistake, Chili crossed the line sixth

That particular Spanish GP is a hard one to forget, especially for those who played a starring role. It was Sunday 10 May, and at Jerez de la Frontera, 37 riders from four different two-stroke manufacturers lined up for the 250 race. Good times.

Not so good for Pierfrancesco Chili though, who was competing for team Valesi. With the unmistakeable number 7 Aprilia, the Italian got away well from the front row, having qualified fourth. It promised to be a great race.

And it almost was. The then 28-year old battled against rival Loris Reggiani, flaunting an inimitable riding style that was making the difference, particularly through the fast turns. But things then took a turn for the worse.

The race ran over 24 laps. Pierfrancesco had managed to break away from the chasing group, which included Reggiani. Convinced that the win was his, Chili slowed as he approached the finish line.

The theoretical finish line that is. Unfortunately for the Italian, there was a still 4218 metres, or rather one full lap, to go. Pleased with what he believed to be a second-place finish, Chili started to celebrate, only to see other bikes passing his Aprilia at full speed.

"What’s going on?" Realising that the battle wasn’t yet over, Frankie got back on the gas and made a final lap of the Jerez track. He did well to finish sixth, but he could have done so much more. The win ultimately went to Reggiani, followed by Bradl and Shimuzu, then Cadalora and Cardus. Frankie burst into tears once off the bike.

And so it was that Pierfrancesco stopped, celebrated (in vain), realised his error and then finished the race. His final result was solid, but not a podium finish, every rider’s goal.

He cried over what happened. But then smiled too, he himself joking about the episode at a later date. This, combined with his talent and particular ability to communicate joy and pain, is what attracted the public.

In both the world championship and SBK, Frankie would bring a significant crowd and would ensure they had fun, with his track antics, his look, his relationship with his rivals. Yes, Piefrancesco Chili was one of the sincerest figures in the paddock. And his Jerez tears would soon give way to smiles thanks to wins at Hockenheim, Assen and Donington.

Hockenheim 1994, Biaggi to Romboni: “It's racing, not classical music”