Race Direction decided not to sanction Joan Mir and Jack Miller after they made contact during the Doha GP, an episode that has caused great online debate since race day.

The two riders were quick to speak up. “I think he did it on purpose! And if that’s the case, he should be sanctioned”, commented the current world champion.

Something that the Australian vehemently denies, deeming it a normal racing incident. “I was protecting my line. He went long with Rins, he wanted to come back, while I didn’t”, commented Miller after the race. “I held my position and tried to run my own race, but I don’t want to talk too much about it, these things happen in racing, you saw what happened”.

Jorge Lorenzo, now something of a pundit, talked about the episode on his YouTube channel. “Mir might have been a little too aggressive when he tried to pass, but I didn’t like Miller’s reaction coming out of the last turn”, comments the Majorcan, never overly complimentary when it comes to #43.

“He looked at him a couple of time, he knew exactly where he was, but he didn’t leave him room despite knowing that Mir would be at full throttle there. And after the contact between the two, Miller then risked hitting Vinales. Luckily nothing happened, but I don’t think Miller was correct”. 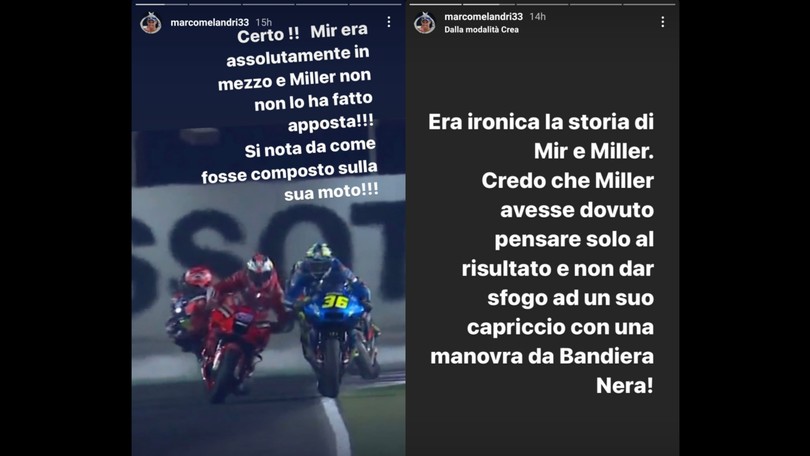 An opinion shared by another former world champion, Marco Melandri, who is pretty clear about what he saw on Sunday.

“Sure, Mir was right in the middle and Miller didn’t do it on purpose. You can tell from his position on the bike” comments a sarcastic Melandri on Instagram, alongside a frame of the contact. “Miller should have focused on the race result rather than throwing a tantum with a move that deserved a black flag”.

Jorge and Marco both come down pretty hard on Miller, and they probably aren’t the only ones. What do you think?

Jorge Lorenzo and the Jerez dive that almost ended in tragedy

MotoGP Doha: criticism re the crowd at the Qatar GP. Will things be better?