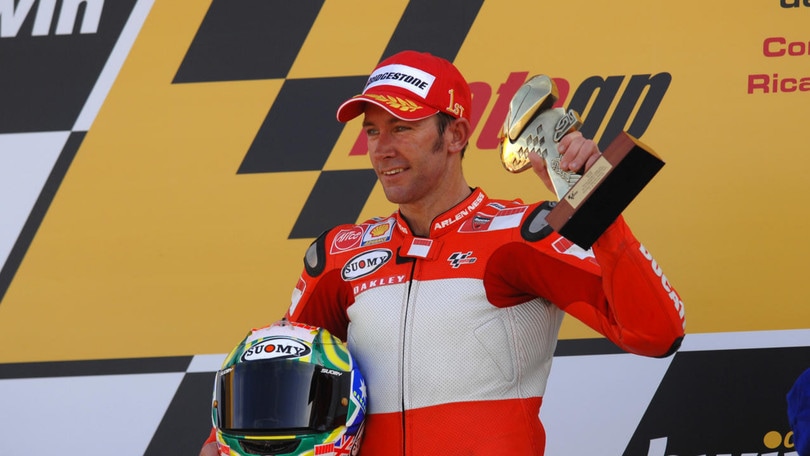 Returning to MotoGP as a wildcard, at 37, and winning right off the bat after a year away: this is what Troy Bayliss did on that scorching Sunday in October

The 2006 Valencia GP has gone down in history for a feat as legendary as it was unique: we’re talking about Troy Bayliss’ incredible win in his one and only MotoGP race of the season.

A victory that few are able to explain even now, but that seemed to come down to the rider’s sheer determination, Bayliss always ready to give it his all.

It was October and Troy Bayliss had already had a triumphant year, securing his second Superbike title on returning to the production-derived series after a stint in MotoGP.

In the meantime, the MotoGP season was drawing to an end, Valencia preparing to host the final battle between title contenders Valentino Rossi and Nicky Hayden. Loris Capirossi’s team-mate Sete Gibernau was unable to take part, and so Ducati decided to call in Troy, who quickly accepted this latest challenge.

The race marked a return to the top class for the Australian, who hadn’t done particularly well during his previous years in the championship, scoring just four podiums between 2003 and 2005. But things would be very different this time around.

On paper, the odds were against Bayliss, who hadn’t ridden a Desmosedici since 2004. The bike was equipped with Bridgestone tyres, which he’d never tested and were totally different from the SBK tyres. But Troy was not deterred and managed to qualify in second place for the race, behind Valentino Rossi.

After a less than inspiring warm-up on the Sunday, it was time to race. Bayliss made a great start and immediately moved into the lead. Valentino Rossi soon crashed, waving goodbye to the title. A blessing in disguise for Hayden, who ran behind the leading group.

But the real spectacle was up front, as Troy pushed on, not interested in what was going on behind him and focused only on writing another page of history. His did so by winning the Valencia race, becoming the only rider in history to win a MotoGP and SBK race during the same season. An achievement that has never been repeated, and an unequivocal response to those who consider SBK riders to be inferior to the MotoGP field.

“It was a very tough weekend”, commented Bayliss after the race. “It’s a special win, because I started with the Ducati project in MotoGP, together with Loris, and to return with this result is fantastic”.

This was to be Troy’s final appearance in MotoGP, before he returned to Superbike and won his third and final title in 2008. The Australian even retired a winner, thanks to the victory he scored at the final Portimao round.

Because for someone like Bayliss, a hero of two worlds, the story couldn’t finish in any other way.