Only those of great courage achieve stand-out feats, in life as in motorsport. We can definitely include Loris Capirossi in this category, a rider with true strength of will and one of the first – if not the first – to believe in the Ducati MotoGP project. 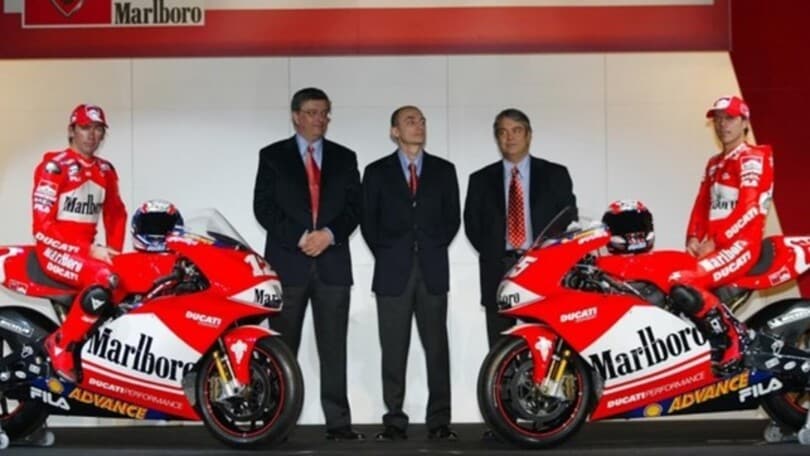 It was 2003 when the Borgo Panigale manufacturer debuted in the new MotoGP, a year later than its rivals. The GP3 stood out for its trellis frame and desmodromic engine and was a beautiful, aggressive bike that quickly proved fast on track.

The GP3 was quite literally scary, perpetually sideways out of the turns, the slightest touch of the gas was enough to make it jump, almost like a skittish bull.

And yet Capirossi was able to tame it, almost immediately. After setting the best time at the Barcelona IRTA tests, in March 2003, the Italian lined up at season-opener Suzuka, well aware of his and his bike’s potential. In Japan, he scored a third-place finish, behind Valentino Rossi on the Sunday of Daijiro Kato’s terrible accident. This was followed by three DNFs, before he finished second at the Mugello GP, a track where Ducati showcased the Desmosedici’s incredible top speed. 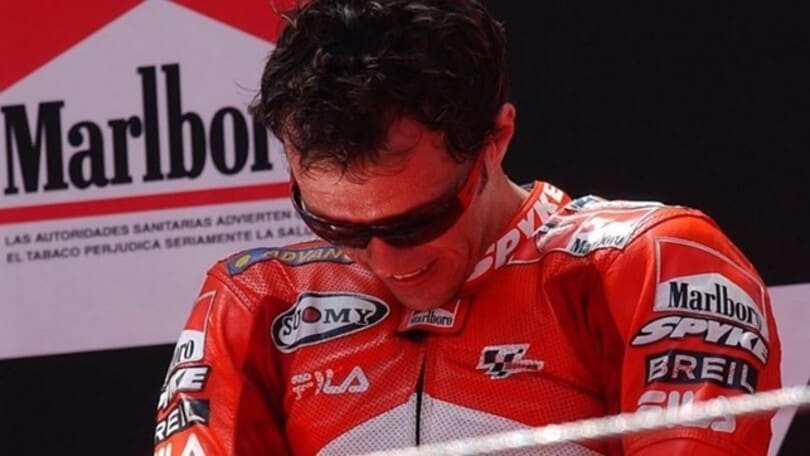 Barcelona was the ideal setting for the big one, or rather the Italian team’s first win in the top class. Getting away from second on the grid, Capirossi battled it out with poleman Valentino Rossi, who struggled against the power of the desmo engine. After taking turns out front, Rossi ran off track eight laps from the end as he tried to defend himself from Capirex. This paved the way for number 65’s victory.

The Doctor did his best to catch up, and ultimately crossed the line second. But Loris and his red bike were unstoppable as they celebrated their first win in the MotoGP class, an Italian pairing having not achieved such a result since 1976. 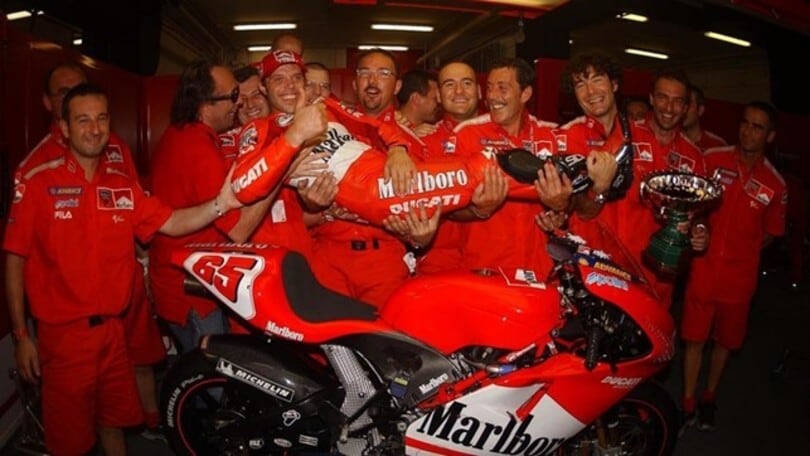 "My last win was back in 2000, so you can imagine how happy I am today. I think it’s one of the best of my career. And it is also a great prize for Ducati, for Marlboro and for the whole team", commented Capirossi at the end of the race. "Today’s race was incredible, especially early on when I was riding with Valentino. The pace wasn’t so fast but after his mistake I was able to pass. When I saw him run off I gave 100%. Biaggi was catching me but, three laps from the end when I turned around, there was no one there. My board told me that Rossi was coming but I continued to push for the last two laps. Thanks to everyone who has believed in me, this has been a fantastic day”.

A wonderful result for the three-time champion, after a difficult 2002 aboard the team Pons Honda, and for Ducati. With it, the Borgo Panigale technicians were able to show the Japanese giants that a small Italian manufacturer was able to give them a run for their money.

A feat that would have been impossible without the determination of one Loris Capirossi from Castel San Pietro Terme.

MotoGP, Marc Marquez's physiotherapist: “You have nothing to prove”

MotoGP, Guidotti: “A surprising start for Pramac. The win? As soon as possible”