While this morning it was the blue of Ecstar Suzuki that dominated, this afternoon it was the "monstrous" blue and black of the sponsor that lends its name to the factory Yamaha team, Maverick Viñales and Fabio Quartararo setting the fastest times during the second half of today’s test.

The Catalan rider topped the timesheets at the Catalan MotoGP test, setting a best of 1'39"400, just a fraction of a second ahead of his French team-mate. The new carbon swingarm seems to be having the desired effect, for an M1 that can better manage the Michelin tyres brought to Montmeló.

In contrast, the performance of Valentino Rossi and Marc Marquez, who finished roughly mid-field. The nine-time and eight-time champions positioned tenth and eleventh at the session’s end. We know that today was ‘only’ a test, but let’s also remember yesterday’s crashes. Even six tenths can affect one’s mood and the final results.

On Sunday, Takaaki didn’t reap what he’d sown over the Barcelona weekend, just thirteenth across the line and far removed from winner Miguel Oliveira, while today he was the quickest Honda rider on track, also riding with a new aerodynamic vent for his RC 213 V.

A solution also tested by Marc Marquez, who completed 87 laps in all, proof that he has regained physical stamina and strength. Now he just needs to finish some races. Something that Joan Mir is doing well, defending his 2020 title despite having not won a race yet.

The Suzuki has gained some electronic updates, which the current champion is developing together with test rider Sylvain Guintoli. As for Alex Rins, we know where he’s at right now. In the Ducati camp, Pecco Bagnaia led the way today, less than half a second from the front. But half a second means three positions.

KTM works in silence, Aprilia on a three-pronged attack

Danilo Petrucci has confirmed the goodness of the Austrian chassis, an element already used by the factory riders and Iker Lecuona. The RC16 appears to be the bike of the moment, at least if we look at Miguel Oliveira’s performance, the Portuguese rider having reached the podium at both Mugello and Montmeló.

He finished ‘just’ ninth in testing, but is this tactical or due to the work they were doing? Let’s go with option two, and we’ll soon see whether we’re right. We think the number 88 rider still has some aces to play, also considering the fundamental support Dani Pedrosa is offering the team.

The Aprilia was strong in the race, it’s just a pity that Aleix Espargaró crashed. The RS-GP has clearly grown and is aiming high. And on hand to help the official riders is Matteo Baiocco. Number 41, Lorenzo Savadori and the Italian made for a very busy trio at Montmeló. 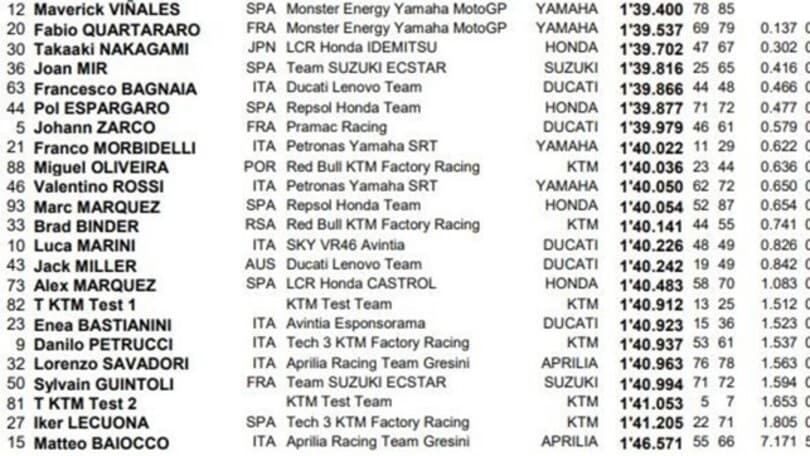 Moto3 and open suits: steady (and quick) hands are required

MotoGP, Stoner has harsh words for Quartararo: “He deserved the black flag”

Moto3 and open suits: steady (and quick) hands are required

Catalunya GP, Rossi: “The changes in FP2 made things worse”

MotoGP Catalunya, Morbidelli: “Ready to risk to stay up front”

MotoGP Catalunya, Martin: “The crash? I hit my head so don't remember it”