A weekend to forget for Danilo Petrucci at the Sachsenring. After a misunderstanding with Enea Bastianini during qualifying, the KTM Tech3 rider saw his race come to a premature end following a crash that also involved Alex Marquez.

"I was unlucky to fall, but I’m lucky to still have my arm”, explains the number 9 rider in an Instagram story.

Tense atmosphere between Petrux and Lecuona 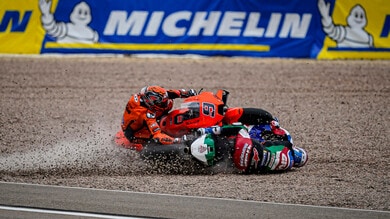 Petrucci is not only angry about the crash, but also the behaviour of team-mate Iker Lecuona during the race, the Italian deeming it too aggressive at times. "Lecuona runs all his races like this. I’m not saying that he could learn from me, because I’m nobody, but there are another 21 riders around him with three times the experience. Trying to attack and make stupid passes in the first five laps on only to finish 17th…. With a calmer approach, we could have finished top ten or at least score points, and be happier”, commented Danilo after the German MotoGP round.

Not exactly an easy time for Petrucci, who is still seeking a (tricky) 2022 contract renewal. Assen is just around the corner and will provide a first opportunity for the Italian to bounce back.

Moto3, Acosta: “Before my mentality was either glory or the hospital”