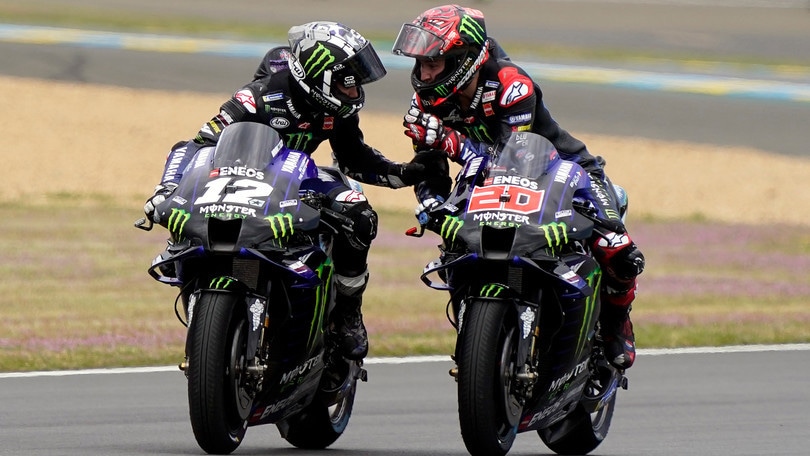 With Viñales leaving at the end of the season, Yamaha will change its factory line-up for the second consecutive year for the first time since the arrival of Rossi. A Suzuki-style move

Ducati started the trend last autumn, when it made a double rider change – Jack Miller and Pecco Bagnaia in, Andrea Dovizioso and Danilo Petrucci out. A move that appears to be paying off, with both former Pramac riders in the top five in the general standings, while Petrucci finished twelfth last year. Since debuting in MotoGP in 2003, the Borgo Panigale factory team had never taken such a revolutionary decision. In fact, they’d never swapped both riders in a 12-month period, something that Yamaha is now about to do. With Rossi having left the factory team last year, it will soon be the turn of Maverick Viñales, frustrated with the varying performance of a bike with which he has experienced both joy (eight wins and thirteen poles) and pain: sixth overall in 2020 with just three podiums in fourteen races, fourth in 2018 and third in both 2017 and 2019, without ever exceeding 230 points, too few for a rider wanting to fight for the title.

Not a change that the Japanese manufacturer makes lightly, having long preferred continuity, perhaps fearful of a return to the disappointing results of the 1994-2003 period. In those years, Yamaha won just 21 races compared to 115 for Honda, the latter scoring nine constructor’s and rider’s titles. 2000 was the exception, a season in which Kenny Roberts Jr won with the Suzuki.

Rossi and Lorenzo, "loyal” to Yamaha

But when it came across two riders who were able to win race after race and world titles too, Yamaha did all it could to keep them. Valentino Rossi remained faithful to the factory team for 15 years, despite a Ducati interlude, while Jorge Lorenzo stayed for nine consecutive seasons. And it’s no coincidence that they are the manufacturer’s two most successful riders of all time: 56 wins for the Doctor, 44 for the Majorcan, and all in MotoGP. And many of their team-mates were also able to demonstrate their worth over more than one season – three for Carlos Checa (2002-2004), following a further three with the Marlboro Yamaha 500, three for Colin Edwards (2005-2007 before moving to Yamaha-Tech 3) and two for Ben Spies (2011-2012).

Honda has also favoured continuity in MotoGP, having never changed both its riders in the space of two years. Nicky Hayden stayed for six and scored the title in 2006, beating the very man who had been his team-mate in 2003, before Rossi moved to Yamaha together with Jeremy Burgess. In the season in which the American beat Valentino, he was paired with Dani Pedrosa (who beat Nicky at the penultimate Estoril round), who was then reconfirmed until 2018, despite the Spaniard having never achieved the title. This was considered something of a sin, but then those who came after him, first Lorenzo, then Alex Marquez, Stefan Bradl and Pol Espargaró, have only scored two podiums combined. Small change compared to the 31 wins and 112 podiums Pedrosa clocked up, the rider only failing to win a race in the last of his thirteen years with Honda.

Suzuki has been less conservative, partly due to the fact it has less financial resources with which to attract and retain the best riders, and also because it has scored fewer results. When it started out in MotoGP, it retained the Kenny Roberts Jr - John Hopkins pairing for three years. The latter remained for two more years, alongside Chris Vermeulen, who was reconfirmed in 2008 and joined by Loris Capirossi. When Suzuki returned to the track in 2015 following a three-year sabbatical, it hired Aleix Espargaró and Viñales but the latter chose to move to Yamaha in 2017, while the other Spaniard was let go in favour of Andrea Iannone and Alex Rins. This pairing also changed two years later, when Joan Mir was brought in to replace the Italian. And consider how, just as it reached the top of the world, the Hamamatsu manufacturer confirmed both riders, affirming the old adage: never change a winning team.