MotoGP: Michelin in the eye of the storm, riders unhappy with the tyres 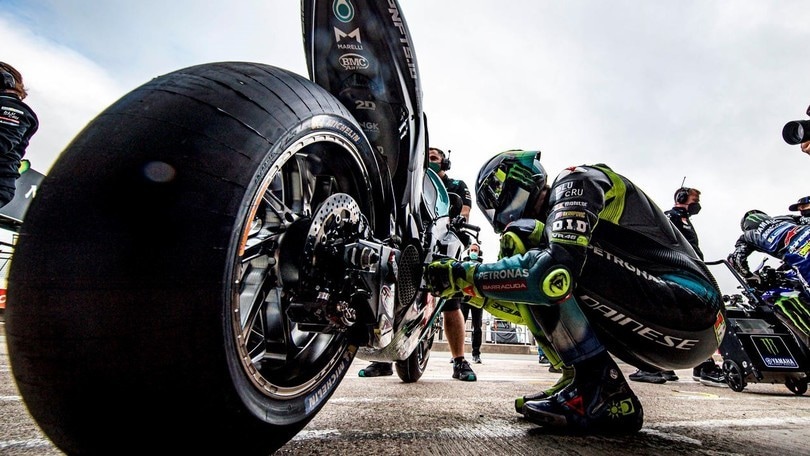 Bagnaia, Rossi and then Mir – all three looked to be compromised by poor tyre performance during the Silverstone race

The Silverstone GP brought smiles, for the podium trio of Quartararo, Rins and Aleix Espargaró for example, but also some disappointment, particularly for Ducati man Francesco Bagnaia and also Petronas rider Valentino Rossi. For the two Italians, who both started in strong positions on the grid, it appears that the rear tyre didn’t hold up. And so it is that the tyre debate is raised once more - a problem for Michelin to solve or just a case of bad luck?

Bagnaia: “Everything needs to be at a high level”

“Something didn’t work, my pace dropped too much during the race - commented Francesco Bagnaia after the race - The soft front tyre was the right choice and I’d choose that again, it was the rear that caused the problems.” So a defective tyre? “I don’t want to blame anyone, but I think we expect anything relating to the bike in a championship like MotoGP to be of a high level. Today my pace dropped by three seconds compared to practice, so we need to look at the data and speak to Michelin as I can’t find any other reason for my performance”. An unfortunate setback that also affected the Ducati rider during the Austrian race. But Pecco wasn’t the only one to complain.

Valentino Rossi also appeared to struggle as the race went on, the Italian eventually crossing the line in eighteenth place: “After five or six laps, the tyre dropped dramatically, and I had no grip on the right side. As if I’d burned it and it had lost his performance. I was losing 1-2-3 seconds a lap, and just tried to reach the line, but it was tough”.

A front tyre issue affected the performance of Joan Mir, who lost a number of positions during the race before finishing ninth: “At first, I felt very confident with my bike and knew I had good pace. But then I really started to struggle with the front, which was totally unexpected, and I lost time through the last laps. This problem started from lap ten, and from then on it was something of a battle. I’m disappointed because I’d hoped for a better result”.

Tardozzi: “No accusations, we need collaboration”

Team manager Davide Tardozzi also spoke about the issue, one that impacted on the Ducati factory team’s performance: “I don’t know what happened - he told Sky - we’ve analysed the initial data and it’s all correct. Now we’ll take a closer look with Michelin of course. We can’t draw any conclusions for now, that would be premature, but it’s clear there was a problem and that Bagnaia didn’t perform as he had in practice. So we need to look at the data once we're at home. Michelin is the first to want to bring the same quality to the tyres it brings to the track, so before making any accusations we need to be sure. In any case, accusations are not useful, instead we need to collaborate to improve”. Everyone hopes that Silverstone remains an isolated incident, although this isn’t the first time this season that the tyres have affected the outcome of a race.