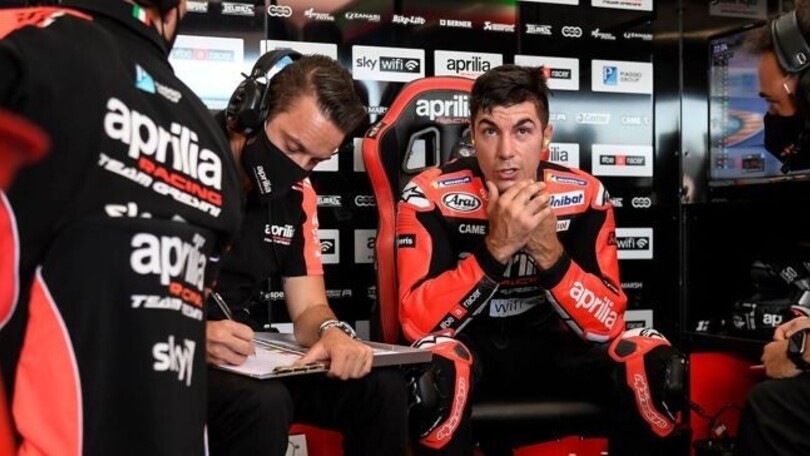 Maverick is making his debut with Aprilia: "I’m not aiming for anything this weekend, only to build experience aboard the RS-GP, so different to the Yamaha in braking"

There’s no denying that all the attention is on Maverick Viñales and the bike he’s been riding in MotoGP free practice at Aragón. Having parted ways with Yamaha, the Spaniard has found a new professional challenge in Aprilia and is competing with the bike for the first time at Motorland.

Here’s what he had to say after having placed nineteenth today: "I’d say it’s gone quite well, though it was difficult to lap with the same speed through every sector of the track. I messed up my time attack attempt but I - we - can do well. We saw interesting progress between the first and second sessions".

Aleix Espargaró believes that "Top Gun" has worked well, on a track with little grip: "Sure, grip counts for a lot, but I’ve been taking things more calmly here", he says, comparing today's approach to the recent Misano test. "It was easy to make mistakes and just as hard to improve the lap times. In testing, I did ten laps, put in fresh tyres, and did another ten. But today I improved after putting in two fresh tyres".

Goals? None, only to learn

What’s Maverick’s pace like? He has an ideal time in mind: "Around 1.48, I think that’s my race pace”. And how does the Aprilia differ to the Yamaha? "I have to get used to the requirements of the RS-GP in braking, very different to those of the M1. The braking is so different, you can push harder on the lever, and I have to get used to that. Where you let the bike run, I’m fast, but I need to improve my braking".

And what are Vinny’s goals for the Motorland weekend: "I have no aims, I just want to learn as much as possible and gain experience in the saddle. But if I continue like this, I can do well on Sunday".

MotoGP, Viñales and Aprilia together at last. What to expect?