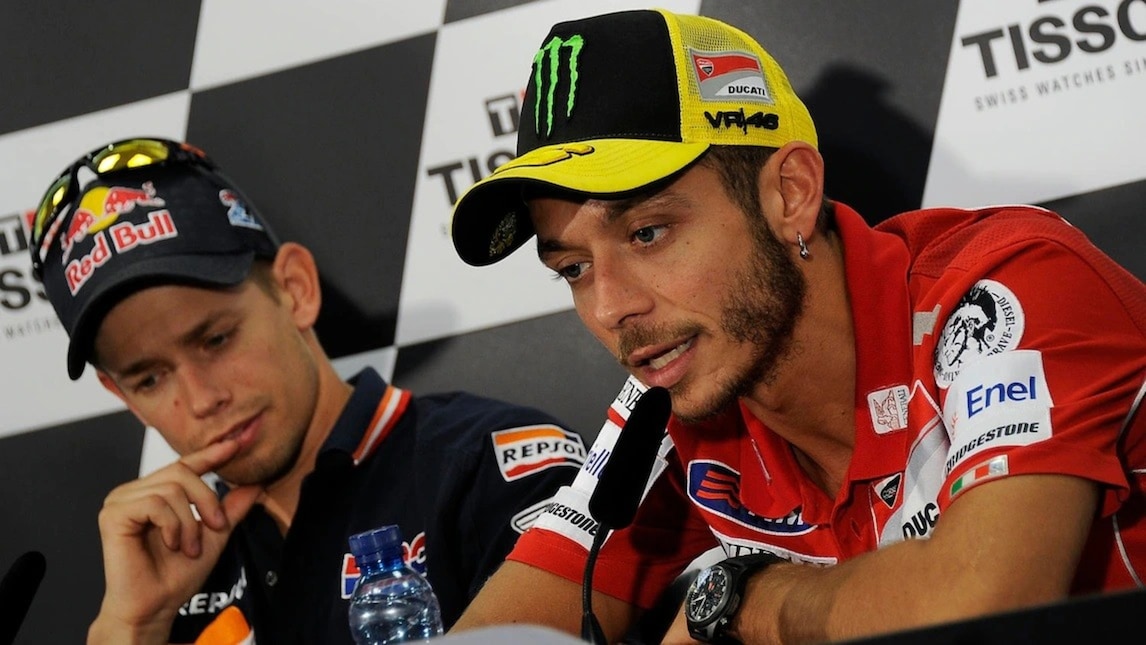 The former Australian rider has once again spoke about his rivalry with Valentino Rossi: "When Pedrosa, Lorenzo and I arrived, we realised he wasn’t better than us"

Casey Stoner and Valentino Rossi shook hands at the Algarve GP, exchanging pleasantries in front of the cameras. But a rivalry as strong as theirs doesn’t just fade away, in fact it returns whenever there’s an opportunity.

And this is clear to see as Stoner is interviewed by DAZN, a segment that features in the ‘RIVale’ documentary which retraces the Doctor’s career through the eyes of his rivals.

Stoner: "He wanted to improve the Ducati, but he only made things worse"

“I was one of his greatest rivals when he was at his peak. Rossi was the best rider in the early 2000s, on another level. But when Jorge Lorenzo, Daniel Pedrosa and I arrived in MotoGP, we realised he wasn’t better than us” recalls Stoner, who landed in the top class in 2006 and then exploded the following year with Ducati.

It was Casey who won the world title in 2007, beating Rossi himself. And the relationship between the pair was never the same again: “Rossi was nice until I became his rival. He always tried to play mind games but when that doesn’t work, all you gain is another rival. He made sure that I was seen as the enemy. And he did the same with Marquez too. From then on, I didn’t want to be his friend or play fairly”.

The Australian stayed with the Borgo Panigale team until 2010, before moving to Honda in 2011 and leaving the Desmosedici to Valentino. “At HRC I had a bike that was sensational to ride. And, I admit, I enjoyed seeing Valentino struggle with the Ducati – explains the two-time champion – He’d talked so much about how he’d be able to improve that bike for the better. But in reality, he was only making things worse”.

Stoner has more to say about the Italian: “He was good in the head-to-head battles, but also at catching a tow. He could never make a fast lap on his own, only by using the slipstream, and that’s a limitation”.