MotoGP: the riders’ market hots up for 2023, Honda targets Quartararo 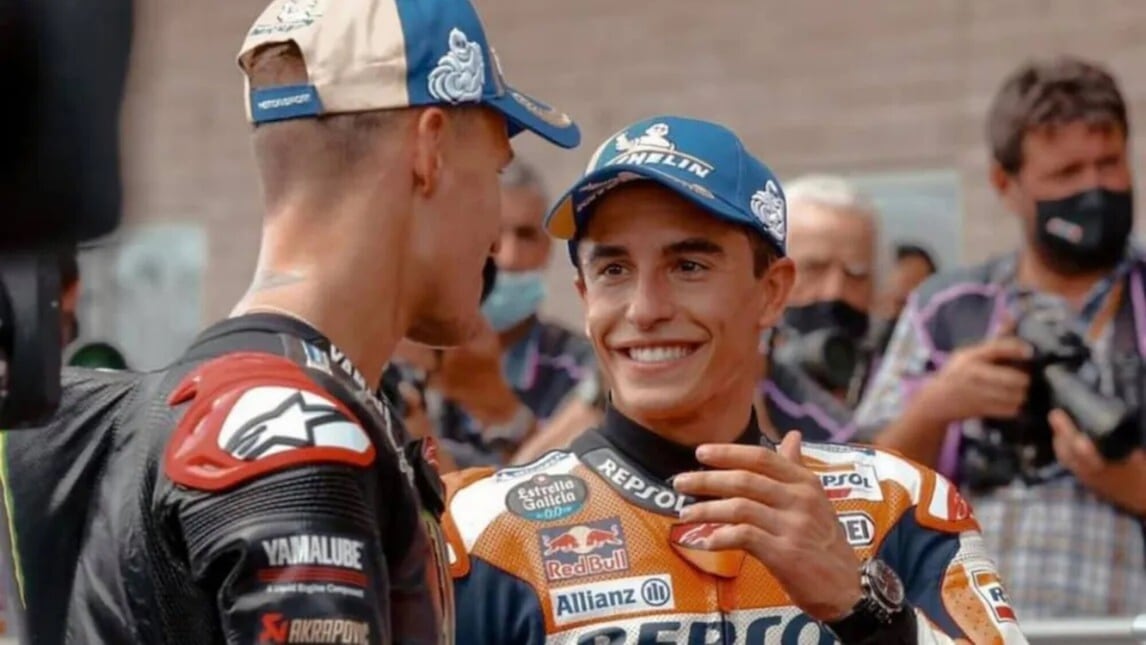 Although the 2022 season is yet to begin, the riders’ market for next year is starting to take shape. The first manufacturer to make a move is Honda, who wants a top rider alongside Marc Marquez

With Valentino Rossi’s retirement and Marc Marquez’s physical problems, the reigning class seeks a new king and one of the candidates is of course world champion Fabio Quartararo, who will now attempt to defend his title and fight off Pecco Bagnaia on the Ducati, the main players during the 2021 season finale. But to overlook Marquez would be a mistake. When fully fit, the Spaniard is still the best of them all, but despite this, Honda has already begun to look around for another top rider who can fight for the title.

Quartararo and Mir in Honda’s sights

Marc’s physical problems, but more importantly a lack of results on the part of Nakagami, Alex Marquez and particularly Pol Espargaró (whose contract runs until the end of 2022) have forced Honda to get the ball rolling in terms of the riders’ market, as it seeks a first-rate rider who can flank the eight-time champion and fight for the title. As reported by Sky Sport, it seems that the Tokyo-based manufacturer already met with Fabio Quartararo in December, and the Frenchman may well be interested, in that he is not fully satisfied with Yamaha’s technical project. The 2022 season will therefore be crucial in terms of understanding the competitiveness of an M1 that looked to be one step behind the Ducati during the second half of 2021.

As an alternative, Honda is considering Joan Mir. The Spaniard was disappointed with his 2021 season with Suzuki, both technically-speaking, with a bike that appeared to be in increasing difficulty, and in terms of the management within the garage following Davide Brivio’s departure. While it is hard to imagine Quartararo leaving Yamaha, it’s not difficult to envisage Joan Mir aboard the Honda. The Spaniard has a riding style that could suit the bike, as well as a personality that could stand up to Marquez.

Yamaha an unknown with Dovizioso, Binder and Morbidelli

In the Yamaha camp, things are not clear with a view to 2023. As we’ve said, Fabio Quartararo is keeping the Japanese manufacturer hanging, but if he were to leave, they’d have a real problem on their hands. There are not many top riders and Morbidelli, though a sure thing in terms of his speed, is not yet there in terms of his physical fitness. Names that have been linked to Yamaha in recent months include Raul Fernandez and Toprak Razgatlioglu. The Superbike World Champion has considered MotoGP more than once and could secure a ride with the Withu Yamaha RNF team, if Dovizioso and Binder fail to convince. While the Spanish rookie, who comes to MotoGP with KTM, is already very much on the Japanese manufacturer’s radar... Might there be further contact with a view to 2023?

But Honda and Yamaha are not the only ones looking ahead to 2023. KTM, in the shape of manager Pit Beirer, has recently revealed that all four of its seats are up for grabs next season – a way to keep riders focused and stimulate improvement. Those most at risk could be Miguel Oliveira and Brad Binder, currently riding for the factory team, who need to look out for young rookies Remy Gardner and the aforementioned Raul Fernandez, who could quickly move up in the hierarchy. Without forgetting Pedro Acosta of course, who would almost certainly trigger a bidding war if he were to immediately do well in Moto2.

And the situation at Ducati is also one to monitor, the ‘hottest’ seat being that of Jack Miller. Bagnaia is untouchable and takes the place of number one rider for the Italian manufacturer, which has also put together a team of young talents ready to take a step up in terms of quality. Enea Bastianini and Jorge Martin are a case in point, both in with a chance of moving to the factory team next season.

2022 MotoGP, the dates of all team presentations