The MX calendar that was published in early December has been turned on its head.

Two months later and the International Motorcycling Federation has had to intervene and modify dates, in light of travel restrictions put in place as a result of Covid-19. Together with the promoter Infront Moto Racing, the FIM has issued a new provisional calendar, which will see the FIM MX World Championship begin later than originally expected.

“The aim for the 2021 season is to finally welcome spectators back and to be able to do so safely and responsibly, with some modifications to be made in light of the current evolution of the pandemic”, states the FIM.

The first round, the Dutch MXGP, is now scheduled to take place on 23 May at Oss, while the season was initially meant to begin on 3 April, with the Oman MXGP, now postponed until 2022. The Italian, Portuguese and German MXGPs are all postponed from April/May to October.

Other changes include two new locations, which will host the two Indonesian rounds. The Asian MXGP will take place at picturesque Borobudur on 4 July, while the Indonesian MXGP will run in Bali on 11 July.

In addition, the Chinese MXGP has been rescheduled, from 19 September to 7 November, to play out at a circuit still to be announced, and the Argentinian MXGP will take place on 21 November at a new track, this too still to be confirmed.

The Italian GP is confirmed for 31 October, but the location has not yet been confirmed. While several MXGP rounds have been delayed, other events such as the FIM SNX, scheduled for 9-10 April in Rovaniemi, Finland, and the FIM Junior Motocross championship, taking place on 31 July-1 August in Megalopoli in Greece, are expected to go ahead as planned.

No Nations GP at Imola

It’s bad news for Italian fans, as the Nations GP, originally scheduled for 26 September at Imola, is now in doubt. While the date is confirmed, the location is not, but it definitely won’t be Imola, as originally planned.

Here is the new, though still provisional, 2021 MXGP calendar. 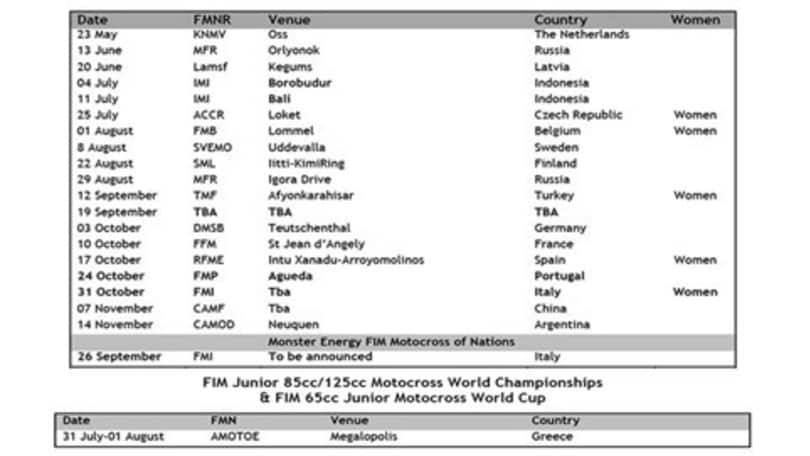 Daytona 200: Kyle Wyman to defend the title with the N2TrackDays Yamaha

MotoGP, Fabio Quartararo: “I know Yamaha will listen to me”

Sharni Pinfold: the internet condemns her, colleagues call for “empathy”