MotoAmerica: Aprilia queen of the Twins Cup with Marcon and De Keyrel 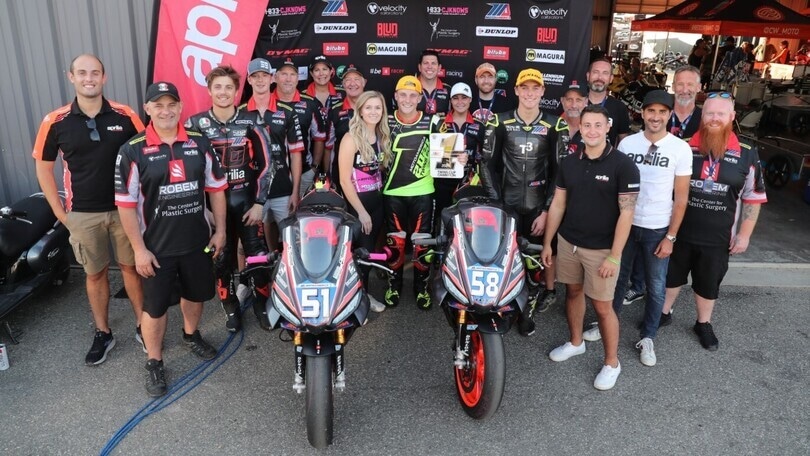 The Italian rider takes victory as a wildcard aboard the RS660 in New Jersey, while Kaleb is crowned champion after a season spent centre stage

The Italian anthem plays in New Jersey. At the penultimate MotoAmerica round, it was Italy who stood out in the Twins Cup category, the Aprilia RS660 proving to be the bike to beat in one of the hardest fought classes in the American series.

Race 1, which played out on Saturday, saw Kaleb De Keyrel crowned champion aboard the RS660 of team Robem Engineering, thanks to a second-place finish behind Cory Ventura and ahead of youngster Maxwell Toth, a former CIV colleague.

As well as lifting the title trophy one round ahead of time, De Keyrel will also have the chance to compete as a wildcard in the final race of the Aprilia RS660 trophy at Vallelunga, part of the Italian CIV championship, where he will be able to line up against some real Aprilia specialists.

The second race was another Italian affair, special guest rider Tommaso Marcon winning with the Aprilia after having also battled for victory in race 1 before ultimately crashing. The Italian, a RS660 test rider, crossed the line ahead of two other Aprilias, ridden by Anthony Mazziotto and Maxwell Toth, both back on the podium during their first weekend in the category.

Marcon will also compete in the MotoAmerica season finale, which will take place at Barber Motorsport Park next weekend.

Pikes Peak, official: no more bikes in the Race to the Clouds