New bike, same result. Jonathan Rea baptised his new Kawasaki ZX-10RR today, and he did so in the best possible way, rounding out this second (and final) day of testing at Jerez on top of the pile. The World Champion set a best of 1’38”324, immediately able to get the best out of the latest bike, an improvement on its predecessor particularly in terms of its engine and electronics. The rest was down to Rea’s right wrist, the rider even managing to finish ahead of a MotoGP (and not for the first time).

The bike in question was Stefan Bradl’s Honda, the German finishing just 15 milliseconds from the leader and followed, almost half a second back, by Toprak Razgatliolgu. The Turk was out on track with the 2021 version of the R1, able to close just ahead of the other factory Kawasaki rider Alex Lowes.

Gerloff’s debuts with the 2021 R1, Locatelli continues with his apprenticeship

In fifth position, roughly eight tenths from the front, was yesterday’s leader Garrett Gerloff, also aboard the 2021 bike after making various comparative tests on day one. Following behind the Kawasakis and Yamahas was Leon Haslam, albeit a second and a half off the pace, proof that Honda still has work to do. Rookie Andrea Locatelli set a similar time as he gets to grips with the category aboard his 2020 R1.

A positive day overall for Lucas Mahias (+1.870), he too making his debut, while Alvaro Bautista appeared to struggle, just ninth and almost two seconds from the leader. It was a training day for the other two rookies Kotha Nozane and Isaac Vinales, roughly 2.5 seconds from Rea and still seeking the right confidence with their Yamaha and Kawasaki respectively. Loris Cresson rounded out the classification, having handed his bike over to Luca Salvadori for a few hours, the Italian on track for promotional purposes. 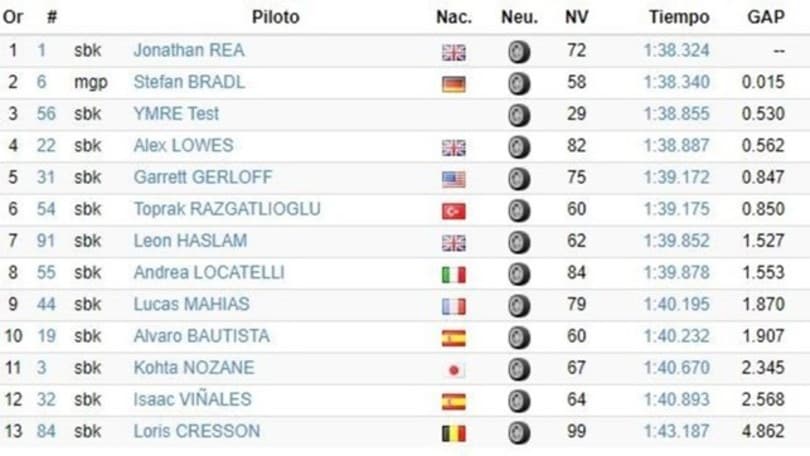 Moto2, who will win? The pros and cons of Sam Lowes