Whatever happened to… Troy Corser 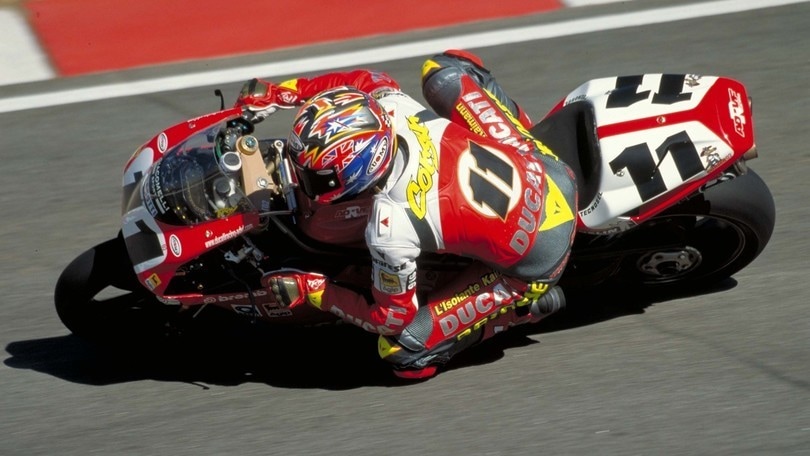 Our journey to discover ‘forgotten’ riders continues with a WorldSBK legend and the first Australian to win the title. It's Mr Superpole himself, Troy Corser

In previous features, we have looked at Karel Abraham and Alex Barros, world championship riders who made brief forays into Superbike. Today, we do the opposite, talking about a Superbike legend with a less than rosy past in the world championship. Make yourselves comfortable as you’re about to hear the story of Mr Crocodile/Mr Superpole Troy Corser, the first Australian Superbike champion.

Troy Corser was born on 27 November 1971 in Wollongong, Australia. Unlike other riders ‘born’ on track, Troy’s early career involved MX and dirt track. He took part in his first race (MX) at the age of 10, before moving on to the dirt track a few years later.

WorldSBK and the AMA (part one) - Yamaha and Ducati

Corser made his world championship debut in 1992, competing in the final rounds of the season, in Australia and New Zealand. Riding a Yamaha, he scored 14 points in all.

In late ‘92 he received the call from Ducati by way of the Fast by Ferracci team. From 1993 to 1994 he competed in the AMA Superbike (what is now MotoAmerica), winning the title in 1994.

1994 saw him alternate between the AMA and WorldSBK. Taking part in four international rounds, he reached the podium in five of the eight races to close the season in eleventh place, with 90 points.

In 1995 he became a Ducati factory rider alongside then champion Carl Fogarty. He finished the season as runner-up with 339 points, four wins and 15 podiums in all.

When Fogarty moved to Honda in 1996, Troy took over the reins as first rider at Ducati. The Australian was more than up to the task and secured his first career title in what was only his second full-time season in Superbike, scoring 369 points, seven wins and 13 podiums.

Troy attempted a move to the world championship in 1997, competing in the 500 class with the Yamaha YZR500 of team RedBull WCM. But his adventure lasted just seven races. After the Dutch GP, the team let him go due to contractual issues. During his time in the championship, he attained just 11 points, having finished only four races.

The disappoint of the 500 class behind him, Troy returned to Ducati with Virginio Ferrari’s team. His team-mate for the 1998 season was Pierfrancesco Chili. It didn’t take Corser long to get back into his rhythm, and he was leading the championship going into the final round at Sugo. That Sunday at Sugo turned out to be a dramatic one, Troy suffering a crash during warm-up that ruled him out of the rest of the day’s action. He nevertheless finished the season third with 328.5 points and just two race wins (race 1 at Laguna Seca and race 2 at Brands Hatch).

In 1999, his final season with Ducati, Troy opened with a double podium in South Africa and a double win on home turf in Australia, ahead of his team-mate Fogarty. The season essentially involved a two-way battle between Fogarty and Corser, and the arrival of a young Colin Edwards. Carl went on to win his fourth and final title that season, while Troy again finished third.

At the end of ‘99 Corser accepted an offer from Aprilia to ride the RSV1000 in 2000. The Australian had a spectacular season and finished third with five wins, eight podiums and 310 points.

Between 2001 and 2002 Corser’s former team-mate called him to propose a project: the Foggy Petronas. Fogarty was convinced that Corser could help with development and Troy gladly accepted. They spent 2002 developing the FP1, ready for its debut in 2003.

But the 2003 season proved quite problematic and the bike was as beautiful as it was plagued with issues. Corser did what he could, a fifth-place finish in race 1 in Australia his best result, but he ended the season 12th with just 107 points.

He did better the following year, finishing second in race 1 at Misano and closing the championship in ninth place with 146 points.

In late 2004 Italian-Belgian manager Francesco Batta called Corser to offer him a ride with Suzuki, aboard the new GSX-R K5. Troy quickly accepted and immediately won at Losail in 2005. The Australian went on to dominate that season, winning eight races and scoring a total of 18 podiums and 433 points (a career best), as well as his second world title.

The following year, 2006, Corser set out to defend his title but his Suzuki was no match for the Ducati 999F06 of Troy Bayliss and the Honda CBR1000RR of James Toseland. While his fellow-countryman went on to lift the title trophy, Corser finished fourth with 254 points and two wins.

In 2007, fifteen years after his SBK debut, Troy returned to Yamaha alongside Haga. He finished the season fifth, with 296 points but no wins and just nine podiums.

He continued with Yamaha in 2008 and went on to battle it out with Bayliss for the title. It was a dream scenario for the Australians, with two of their riders fighting for the trophy. Bayliss ultimately won, with Corser scoring 342 points and 13 podiums to finish second, despite having won no races.

The final three years of Corser’s career were spent with BMW, developing the S1000RR. Mr Crocodile’s results began to drop off during this period, 2010 bringing his final podiums, at Monza and Misano.

Throughout his career, Troy Corser came to be known as Mr Superpole, due to his obvious skills over the flying lap. During his career, the Australian scored 43 pole positions in all, the first in Germany in 1995 and the last in Misano in 2008.

We are often asked what Corser is doing now. At the tender age of 49, the Australian is still linked to BMW and organises riding courses at some of the world’s best tracks. He can be found riding not only the S1000RR but also the new M1000RR, the bike that will be used by teams in both the world and national championships.

Whatever happened to: Alex Barros