The majority of teams and riders entered in this season’s Supersport 600 championship were on track for testing in Spain today, making the most of this official Dorna session, also attended by the 300s. The Montmeló track will host a championship round come mid-September.

The middle class gains one new entry who’s particularly keen to do well. His name’s Dominique Aegerter, the Swiss rider returning from the world championship to a category he already knows, and where he will compete with team Ten Kate. Aboard his Yamaha, the Swiss rookie set a best of 1'44"603, having completed a total of 34 laps. The R6 remains the bike to beat, as teams await the new regulation.

Another Iwata bike places second, namely the GMT94 ridden by Federico Caricasulo. After a season with the 1000, the Italian returns to his first love, a series where he’s won six races in the past. The pair are separated by just 0.280 of a second.

A crash for Odendaal, taken to Granollers hospital. De Rosa strong with the Ninja

Steven Odendaal was riding well but the new Evan Bros hire then crashed and was taken to the local hospital in Granollers where they are examining his right shoulder, which hit the track hard when he fell.

The rest of the field battles it out

2019 champion Randy Krummenacher is now back, having pulled out last season after the opening round with MV Agusta. Italian champion Luca Bernardi makes a good start. Niki Tuuli returns to 600, specifically the 675 F3. Fuligni, Pizzoli and Taccini battle it out in the same group as Michel Fabrizio, with the ZX-6R. The experienced Italian is using this test as a trial run, to understand the general level and his physical condition after a long absence from competition. 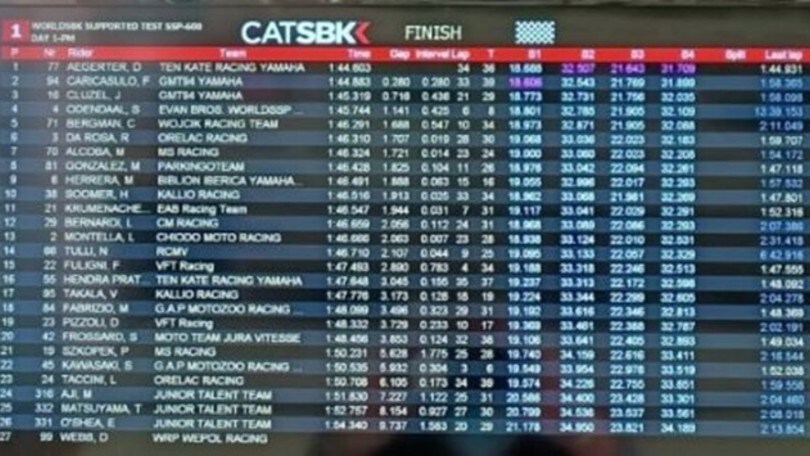 Whatever happened to: Chris Vermeulen

SSP, Caricasulo: “Navarra? A combination of racetrack and kart track”

SBK, Bayliss the fearless spirit: cut my finger off, I have to race!

SBK, Go Eleven throws down the gauntlet: “This blue bike needs to beat the red Ducatis”