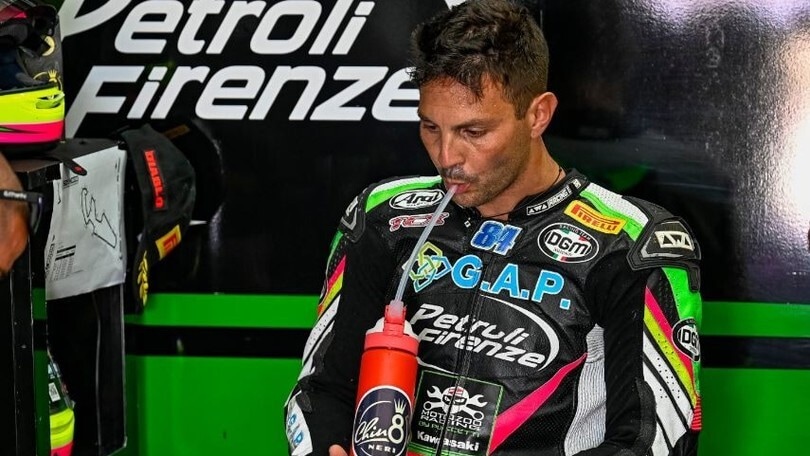 The 36-year old Italian has been away from racing since 2015, and it’s eleven years since he rode a 600: the excitement of his first day back at school

At almost 37, Michel Fabrizio is back in action in the world championship, a series he hasn’t raced in since 2015, when he stood in for the injured Nico Terol in SBK, aboard the Althea Ducati Panigale.

The Italian has actually returned to Supersport 600, his last experience of the category dating back to 2005. Do you remember his nickname? The "Wizard" impressed aboard the Honda back then, so much so as to earn himself a 'promotion'. And the rest is history, from 125 to MotoGP, and of course many seasons in the production-derived paddock.

Sitting in the G.A.P. MOTOZOO Racing By Puccetti garage today, number 84 prepared to head out with his Kawasaki Ninja: "She’s ready, but let’s see if I am”, joked Michel, before adding: "We’re going to have fun!" before Fabio Uccelli and his staff started up the ZX-6R.

A vintage neon helmet and a unique riding style

And just look at Fabrizio’s helmet, like a throwback to the 90s. But Fabrizio is focused on the weekend ahead: "I’ve trained really hard, we’re not messing around here. Not at all in fact, the two races are going to be really tough”.

The same thing he said months ago, when he announced his return. And if consider that we’re talking about a rider who has beaten the likes of Haga, Spies, Corser, Bayliss and Rea, it’s only right that we look back at those vintage moments, recalled by his neon helmet, and seemingly even more real as we watch Michel get back in the saddle.

WorldSBK, Honda: time to get serious