WorldSBK, Razgatlioglu versus Rea, nothing like Bayliss and Edwards 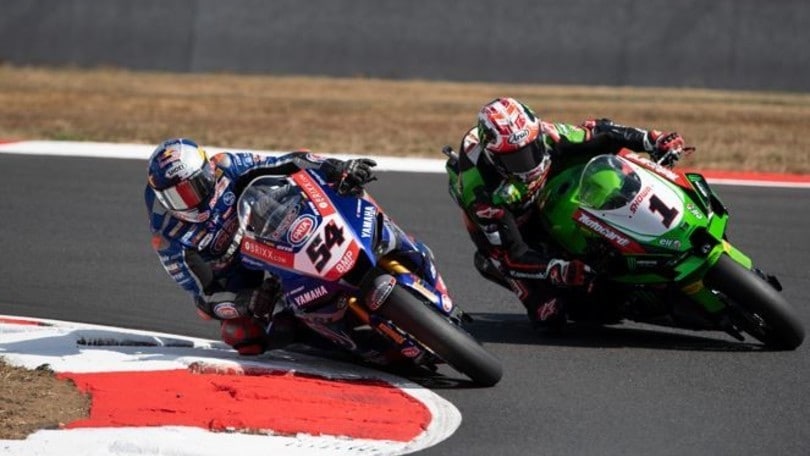 Toprak and Johnny are offering up a better show than we saw between Troy and Colin because, as well as fighting tooth and nail on track, the two title contenders are provoking each other in parc fermé, in the media room, in the paddock and on social media

If you’re nostalgic and convinced that "things were better back when...", then maybe don’t read on. Or rather, do read on, because today’s bombshell is a good one. And here it is: Razgatlioglu and Rea are better than Bayliss and Edwards!

My gosh, you're probably saying, what have you been drinking to write such a thing? Calm down, the Prosecco DOC is on ice for later, to enjoy while we read your comments on Facebook. And now we’ll explain our reasoning, so get comfortable.

The fact is that Toprak and Johnny are caught up in a very close battle, on a wire at more than 300 km/h, duelling without calculation or conjecture. Troy and Colin did much the same, we know, but today’s fight is different, because it also involves protests, penalties, cryptic words, wobbly friendships and social irony.

A fantastic Imola 2002, albeit a repeatable one

Your writer was there at Santerno that autumn in 2002 and had already been a regular in the world championship paddocks for many years, partly out of passion and then, step by step, to build the contacts, knowledge and tools with which to try and learn a trade.

The battle at the Enzo e Dino Ferrari circuit was fantastic, on a stage that only Formula 1 or the historic 200 Miglia competitors would usually see. Two heroes in a field that included the kind of names that still give us goosebumps now, Bayliss and Edwards fought for supremacy all season long. The American ultimately got the better of the Australian, with a final celebration that saw the reciprocal exchange of compliments make international news. Both were set to move to MotoGP, their minds already on their new adventure.

And therein lies the question - if Razga and Rea, so close in the standings, were to reach the end of the 2021 in a similar situation, would they exchange smiles, compliments and parting words? Mmm, we have our doubts, or rather, yes, the pair would demonstrate fair play, but remember what happened in France, the KRT Kawasaki team requesting the penalty inflicted on the Yamaha rider (a move criticised by Locatelli). If that’s not war...

Diversity and a past to remember

The Turk and the Northern Irishman have rather different social, human, behavioural and cultural characteristics, this is clear from watching their interviews and looking at their pictures. Bayliss and Edwards, on the other hand, were a little similar, both cowboys, both brusque. And this is why they understood each other.

Toprak and Johnny understand each other better on track, where they go shoulder to shoulder just as Troy and Colin once did. Even more so at times and, considering the extent to which the electronics impact on the dynamics of a race and how much harder it is to make passes today, we must admit that Sofuoglu’s pupil and the Ballymena native are putting on a show that is in no way inferior to what we’ve seen in the past.

Let’s not forget another important detail. Toprak was already in the Kawasaki orbit, with Puccetti, so theoretically already inside the green tunnel. But someone or something took his "Green Pass" away, which led #54 to sign with Yamaha. Who was it to throw a spanner in the works? Why didn’t Toprak move to the factory team? Come on, the answer’s staring you in the face.

WorldSBK, Razgatlioglu and his “stoppie”. Do you think it's dangerous?